Boxers and Celebrities turn out for Charity Football Tournament 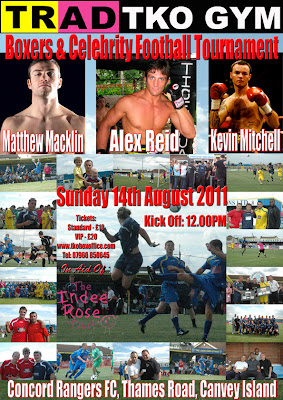 Last July Johnny Eames and the crew at the TKO Boxing Gym in Canning Town organised a celebrity football tournament, on Canvey Island, Essex, to raise funds for the Indee Rose Trust. The event was a massive success that not only attracted stars from the world of boxing, television and music but also raised in excess of £20,000 for this worthy cause.

Johnny, who earlier this year was himself diagnosed with cancer, is clearly determined that this years event will be even more successful than the last, as he made clear when he said earlier, “Last year’s was fantastic, we raised over twenty grand, which far exceeded anything we were looking at doing. But that’s made me greedier to raise even more this year really.
We’ve been a little bit slow getting it off the ground this year, for certain reasons , certain things have been going on in my life which didn’t allow me to get involved quite as early as I planned to, but hopefully those problems are dealt with now and we want to move on to help out a worthy charity, which I am proud to be patron of.

I’m privileged to know the parents of young Indee, Russell and Jane, and privileged to be able to raise money to help children suffering with the same disease.

This year’s event is hopefully going to be a lot bigger than last years, we’re sitting down at the moment and planning out how it’s going to go, what players we have coming this year.

Because of the lateness on starting things this year we’ve missed a few of the players, but it’s still basically the same sort of response as last year.

Paul Smith’s pickpockets, who won it last year, are coming. Graham Earl’s got a team, which he seems to want to have a bet he’ll win it outright this year.
Us runners up – TKO Boxers – I’m pretty confident as I’ve got a few ringers up my sleeve.

Indee Rose are going to field a team this year, and they seem confident that they’re gonna win it, they’ve been training for it for three months already, and that’s just to get their beer bellies off.

Boxing News are gonna put a team in them self, they won the wooden spoon last year, but I’m sure that Tris (Dixon) from Boxing News has got a few tricks up his sleeve as he doesn’t want to get disgraced like last year. All in the fun of it.

Ringtone Gym are putting together a music and boxing team headed up by Ben (Day) himself and his mate Johnny Borrell, from Razorlight, they enjoyed last year so much they decided to put their own team together this year.

We’ve got a team of Paddy’s coming over and Ricky Burns is bringing a team of Jocks down from bonny Scotland.
Our sponsors have come forward a lot this year, we only need one more team to do, which I’m pretty certain will be covered by end of play. We are still looking for certain sponsors, one to pay the hotel bill for all the traveling teams. The other sponsor we are looking for is on the catering side, we’ve got an after tournament party for the players and their families and are looking for someone that does catering.

The event this year is going to be covered by Sky Sports, Ed Robinson himself came down to the gym last week and did an interview to promote the event and he’s assured ne that he is going to give the event some coverage this year on Ringside, which’ll be great for potential sponsors, if they sponsor the right team you’re going to get some good coverage, although every sponsor is going to have his name on the front of the shirts, so there’s going to be plenty of advertisement for the team sponsors. It’s worth getting involved if only to help these youngsters that are suffering with this terrible disease.
I’m pretty certain that we can top the twenty thousand that we raised last year and hopefully double it. Get your fingers on the phone and ring me up and get your pledges going.”

Indee Rose’s father Russell Dopson then added “Last year was amazing, I couldn’t believe how many stars we had turn up.

We had over three thousand people turn up on the day and we managed to raise twenty thousand pounds, which was well above our expectations.

Everyone is buzzing about this year, I can’t wait to get it all going and am really looking forward to it.”

Children’s tickets, priced £5.00, will be available on the day.

For further information either call the TRAD TKO Boxing Gym on 020 7474 3199 or see www.indeerosetrust.org or
credit Gianluca (Rio) Di Caro