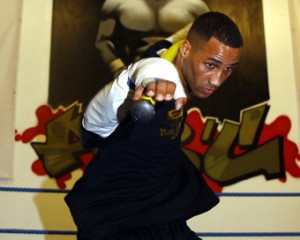 James DeGale is desperate to get back into the ring and claim the European Super-Middleweight title in his comeback fight in September.
The former British Super-Middleweight Champion met face-to-face with the champion Piotr Wilczewski in London today and promised to take the title from him.
Promoter Frank Warren will confirm the date and venue of the fight on Monday.
This will be DeGale’s first fight since his controversial loss to rival George Groves in May when many ringside observers thought he did enough to win.
DeGale said, “It’s fantastic that I’m fighting for the European title on my first fight back and full credit to Frank Warren for doing a great job in getting me it,”
“I still think I won the fight against Groves, but that’s in the past and I’m moving onwards and upwards in my career and the European title is a major title I want to win.”
“Wilczewski is a tough and dangerous looking kid, he’s got a good record, he carries a high world ranking and I reckon he is a much better fighter than Groves,”
“It’s a tough test and I’m looking forward to it. I want to be the best and I’ve got to get through this guy to prove it,”
nuffinlongtv
Wilczewski, who is ranked number two by the WBO, said, “DeGale is a good strong fighter and he proved his class winning the Olympic gold medal,”
“I’m not worried by coming to England to face him. I guarantee that there will be more fans cheering for me in the arena on the night than him because there are more Polish people in England than back in Poland!”

“He will be in a real fight against me. I will not let my title go without a fight and he’d better be prepared to go to war with me.”