Haye v Klitschko – Tale of the Tape and Expert Predictions 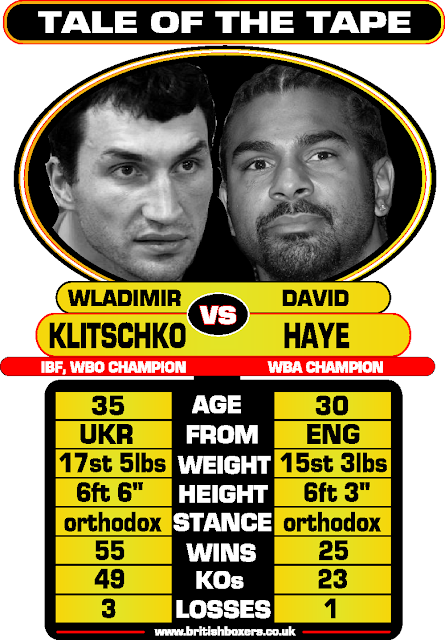 David Haye vs Wladimir Klitschko is upon us! After the long build-up, fight postponements, video call-outs, bitching and cursing, the meeting of the two world heavyweight boxers that matter and now is the chance to let their fists do the talking.
Can Haye’s ‘Haymaker’ right hand settle the argument? Will he be quick enough to get inside Klitschko’s dominating jab and land the shots that unsettle the Ukrainian and ultimately knock him out? If Haye is to defeat Klitschko and unify the richest Prize in sport, the common consensus is, he must do it early!
Haye will need to take Klitschko out of his comfort zone and not let him settle into a rhythm. Klitschko will be content on boxing to the formula that has seen him claim 55 wins and 49 KOs from 58 fights. He will try to keep Haye at range, pepper him with his measuring stick and look to drop in his own big right hand.
Klitschko says Haye will be his 50th knockout victory, but equally he will be happy to take a long drawn out points win, a luxury that Haye cannot afford to gamble on, being away from home in Klitschko’s adopted country.
The winner, I believe will be the one who lands the first telling shot, the crack in the armory that they are both vulnerable to. If Haye can land that big shot, he will pounce on Klitschko and the WBA champion is a good finisher, he wont let Klitschko off the hook!
If Klitschko lands the early blow and hurts Haye, his fighting style and temperament, wont allow to go hell for leather looking for the finish. He will be patient, cunning and knowing in the fact he can hurt Haye. I believe would look to take the fight into the late rounds and eventually aim to wear the Brit down and stop him after administering a long sustained accurate shots, keeping Haye at bay.
Hayes explosiveness, speed and power are the tools of the trade that he has taken to Hamburg and the attributes he and his followers believe, will be the ones to finish the job and defeat the long reigning Klitschko. Haye’s tactics will be to neutralise Klitschko’s strengths and take the IBF and WBO champion out of his comfort zone.
The on the fence prediction and safe bet is Haye early, Klitschko late. Like the fight contracts, it really is a 50/50 fight! Which is what makes it such a Hugh occasion. Heavyweight boxing is back in the spotlight and both boxers, have created a fight that transcends from the dedicated boxing publications, into the highest hubs of the world press and the public subconscious.
I believe Haye can overcome all the disadvantages that Klitschko holds over him, weight, height, reach, experience and home advantage, to claim an historic victory. Haye constantly parrying Klitschko’s jab, faints and knocks Klitschko off balance with an unexpected stiff jab of his own. Haye pounces landing a right hand that has Klitschko in trouble, he follows up with a combination of hooks and Klitschko takes a knee. He is up a 9, Haye steams in and two looping right hands forces the referee to step in as Klitschko is ready to go! – By Chris Maylett
Who do the trade think will win?
Lennox Lewis: Last undisputed heavyweight champion.

He’s got to knock him out. He has the talent to do it. He has to use his speed. If David is 100 per cent he should win. Haye KO.

Haye’s speed will enable him to beat Klitschko to the punch. Haye wins by KO.

I love David to bits and I think he’s going to go out there and really shock everybody. Haye to win.

If Haye jumps on him early, and hurts him he will win. But if he lets Klitschko settle in and work behind his jab, the fight will be hard work. But I pick Haye to stop Klitschko.

David is a warrior and he knows he has the punches to do the job. I think he’ll smash Klitschko and stop him.

Klitschko is just too big for Haye. He’ll catch him and stop him inside the distance.

Carl Thompson, only man to have defeated Haye

I’d love to say David Haye win but on paper, Klitschko wins. As a heavyweight, he has competed at a higher level.

It’s a toss-up. If Haye gets past the jab he will stop Wlad within seven. Or, Wlad will stop Haye in four.” I cant pick a winner.

I think Klitschko will win by technical knockout in the ninth round. He is too strong and uses his jab well.” Klitschko TKO.

I like David Haye, but I think Wladimir Klitschko is too superior and too strong. Klitschko, a great champion, should wipe him out. I could be wrong, but Wladimir should beat him.

Being British, I hope he can go out there and unify the division. But I see Klitschko knocking him out late on. Out in Hamburg, against one of the Klitschko’s, it’s a difficult task for Haye.

David Haye will win by KO by the middle rounds. He has skill, speed and power. Something Klitschko has not seen as a professional. I am very confident David will come back with four belts.

I think he’ll win the fight, he has speed, power, he’s explosive and I predict he will take him out early.” Haye wins.

I fancy Haye but any result will not surprise me. Haye’s speed could be a key factor.” Haye win.

Haye inside five rounds. The first few rounds will be very cagey because whoever lands cleanly first, the fight is over.

Haye’s not big enough. Klitschko will catch him and knock him out.

Emanuel Steward has made Klitschko a much better fighter. He is the bigger, stronger guy, and technically very good. Klitschko wins.

Once Haye realises how difficult it will be just to get close and how much energy it takes, his gameplan will go out the window and it’s only a matter of time. Klitschko KO.

Klitschko to win by KO because of his size, his power and his speed. He is better in every department.

I think Hayes speed will be to much for Klitchko,hopefully hell knock him out before the 6th or 7th,but make no mistake if Klitchko lands on his chin Haye will go,fingers crossed,you seen last week with Macklin ,the judges are watching another fight,so don’t think hell get the points decision.

Got my money on David Haye points win even tho a think deep down Klitchko going to win hope I am wrong.

I hope I’m wrong but I see wlad winning on points, by simply boxing at distance using his jab and being boring as always, Haye simply needs a KO to win, right fight, wrong country, come on Haye, boxing needs a Haye win.

Its going be one hell of a fight. i can not wait for this, great build up hope the fight is as good as the build up.