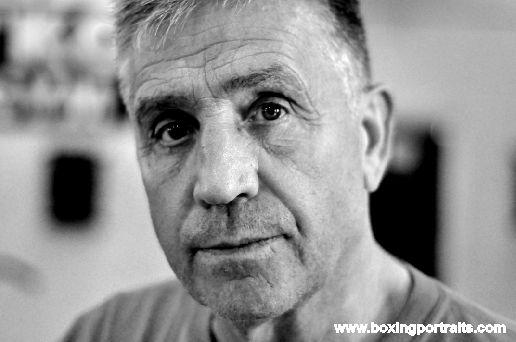 Boxing Portraits an exhibition of fight photographs by Andy Gray

Boxing Portraits is the name of Andy Grays passion and future vision. Andy spent two years working as a photographers assistant in the early 1990s and since retained a strong interest in taking photographs as a hobby.

His sporting passion had always been boxing after watching Muhammed Ali v Leon Spinks fight in 1978 as a youth and then being captivated by the intensity of the rivalry between Hagler, Duran, Leonard and Hearns throughout the early 1980s. 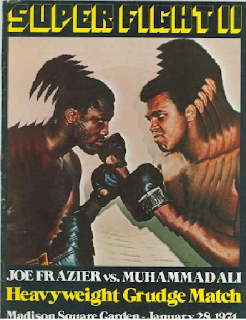 Newcastle born and now living in Manchester, Andy decided to mix his two interests and create ultimately produce an exhibition of portraits within the UK and around the world to be supported by historic memorabilia and interactive archive footage.

Having formally started in October 2009, the goal is to take as many portrait photographs of people involved in boxing from established world champions with global reputations to new professionals starting out on their journey, including trainers and fight figures alike.

As part of any exhibition that materialises, Andy will look to donate a percentage of any income from prints or books back into the boxing clubs within local communities. This side of the project could potentially include the establishment of a recognised patron within the sport but requires some further development along the way.

BritishBoxers website work closely with Andy and we have featured many of his pictures on our website to accompany articles etc. We have visited many gyms together over the past year and will continue to support and help each other progress in boxing.

We wanted to introduce people to Andy’s fantastic work and let you see for yourself the fine photographs he has been taking on his picture journey through boxing’s characters. To see more of Andy’s work please visit his website www.boxingportraits.com

If you are a boxer or fight figure and would like to feature on Boxing Portraits and the future exhibition, please contact Andy at the website.

We interviewed Andy to get his views on his work and why he is doing what he does?

How did boxing Portraits come about?

The idea came to me when I went to an exhibition in Tokyo called Fifa 100, portrait photographs of top 100 footballers by different photographers. had the thought that boxers have charismatic faces and would make good portrait subjects. At the time i had no way of getting into the boxing world so e-mailed a load of boxers websites and the only one to reply was Glenn McCrory. Even with that initial contact it proved tough to take the next steps until i got a break with a local boxer. A friend from work sponsored Michael Jennings to go to the US for his fight with Miguel Cotto and helped me with some contact details for Michael. Met up with him and photographed a load of boxers at the Moston and Collyhurst Gym in Manchester and used these initial shots to follow up the Glenn McCrory interest.
I met Glenn at his home in Newcastle and he provided some excellent industry contacts – some of which I still haven’t followed up yet. Once I’d followed up a couple of initial contacts with Anthony Farnell and Joe Gallagher the portfolio started to develop and I was able to set up the website with the invaluable help of my mate who runs Ram Creative in Manchester. Its been active for less than 2 yrs with no real promotion but we’ve still had people viewing the site from around the world in the USA, Canada, Japan, Chile, Ukraine and South Africa. I’ve also had a number of enquiries from authors in the US looking to use some of the images and hope to have some published in late 2011.

What is your ethos for Boxing Portraits?

I’m a massive fan of old boxing history and read books and collect memorabilia from the early 1900s onwards. I also used to work as a photographer and keep an interest in particular for collecting old photographs of boxers. I stumbled upon an American photographer called George Grantham Bain who was active around the early part of the 20th Century in the States photographing all kinds of sportsmen and in particular boxers such as Jim Jeffries, Jack Johnson, Jess Willard etc – I liked the simple classical style of his photos and am trying myself to capture some of this in my work. I am a big fan of other photographers involved in boxing who look to incorporate more ambitious styles and effects but I’m trying to keep mine simple and classical. I struggle to understand how such a once great sport attended by kings and queens around the world (when you read these old books) can now sit on the BBC website amongst others, only above snooker, horse racing and disability sport. I read articles by people such as Adam Smith (SKY SPORTS) and Richard Schaefer (Golden Boy Promotions), and Eddie Hearn (Matchroom Promotions) who talk about trying to restore some of the pride and respect in boxing etc and although I don’t have any financial or corporate backing as such at this stage I’d like to think my intentions are similar.

I have massive respect for anyone with the courage and conviction to get into a boxing ring and whether they’ve had 1 fight or 400, whether they’ve lost them all or are multiple weight world champions – I’m trying to recognise and respect their achievements. Everyone of them is someones son, father, brother or uncle etc and I’d like to show them in my photographs as more than just a fighter – as a person and a man.

Your ultimate aim is?

To be able to get support from within the industry at a promotional and possible TV level to enable me to continue making contact and photographing boxers and trainers alike. My goal is to have enough quality photographs supported by excellent historical memorabilia and archive footage of classic fights as recommended by some of today’s top boxers.

Taking portrait photographs of someone from the boxing industry past and present (professional fighters, trainers, promoters etc) and where possible, they then provide follow up contact details for potential future subjects. In due course, I will aim to show where the connections have originated from and how my portfolio has grown – a kind of family tree of boxing.
I cannot promise it will not change along the way but my dream is to take as many portrait photographs of people involved in boxing from established world champions with global reputations to new professionals starting out on their journey.
Having formally started in October 2009, my project is still relatively new and in the future, my goal is to ultimately promote an exhibition of portraits within the UK and around the world to be supported by historic memorabilia and interactive archive footage.
As part of any exhibition that materialises, I will look to donate a percentage of any income from prints or books back into the boxing clubs within local communities. This side of the project could potentially include the establishment of a recognised patron within the sport but requires some further development along the way.

Your knowledge of boxing!

Through attending fights, collecting memorabilia and reading historical books indicates a sport which has enjoyed immense popularity over the years with a direct link to the social characteristics of communities in countries around the world. In recent years the sport has appeared to suffer from more negative publicity and a declining exposure to the very public who ensure its longevity.
I have a genuine passion for both boxing and photography! and am starting out on a very ambitious project which with the support from those within the industry will hopefully reach the undoubted heights of its potential.