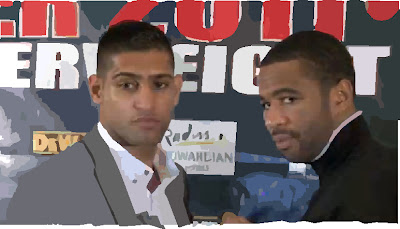 Amir Khan defends his WBA and IBF light-welterweight titles against mandatory challenger Lamont Peterson on December 10th in Washington US and both boxers attended a press conference at The Mayfair Hotel in London on Tuesday to officially announce the fight.

This could well be Khan’s last fight at this weight, with the Bolton man looking to move up to welterweight and chase a fight with pound for pound No1 Floyd Mayweather Jnr. – a fight he hopes can happen within the year.

Peterson’s got a lion’s heart and the one thing that excites me is it`s going to be great fight. Both of us have been down and come back so he`s just like me a box fighter like myself. I can see this fight being very technical, Freddie said we have to stick to a game plan for this fight. I know Lamont has trained very hard for this fight but I am going to be training even harder. It`s always harder to keep hold of your titles. I’m fighting the best fighters in this division.” – Amir Khan

Challenger Peterson (29-1-1, 15KOs) a Washington resident will have home advantage in the biggest chance of his career and will bring his A-game, he is not an opponent Khan can take lightly and the champion will need to be firing on all cylinders to overcome a live challenger by fight time!

I`m glad to be here, I`m glad to be fighting for a world title again.I know Amir will be training hard to defend his titles, I will be training hard to take his titles. It should be a great fight. I appreciate the opportunity to be fighting for the world title again. A lot of people who are world champions won`t go to someone else`s back yard so I give Amir a lot of credit for that. It will be a great fight and I am looking forward to it.” – Lamont Peterson

Khan, (26-,1 18KOs) has won his last eight fights, his last outing was July in Las Vegas when he stopped Zab Judah in the fifth round to add Judah’s IBF belt to his WBA strap and unify the division.