The Nathan Cleverly and Tony Bellew’s world title fight was good enough to top any fight card in the world on Saturday night at the Liverpool’s Echo Arena.
The twelve round war that Cleverly went onto win and retain his WBO belt will be remembered for a long time by those boxing fans who witnessed it.
Prior to the main event we had James DeGale challenge for and claim the European super-middleweight belt, outpointing the hard Polish champion Piotr Wilczewski over the distance.

The undercard that proceeded these two big British boxing showdowns was an entertaining one with some of the country’s best prospects plying there trade, with the chance to show the bigger audience in attendance what they could do.

The home fighter ripped a devastating hook into Healy’s body that had the Irishman over, Scriven took referee Mark Lyson’s full count of ten, deciding he didn’t need anymore of this 22-year-old scouser, who is really looking the part and could well become the best of the fighting Smith brothers.

Nicknamed ‘Beefy’ – Smith the younger is now trained by Joe Gallagher after joining his brothers and former British title holders Paul and Stephen up the M62 in Manchester. Smith looks to have improved his style to adapt to the professional ranks and was compact and powerful in his attacks.
This was Smith’s second fight in a month and he has now stopped his last three opponents Matt Scriven in one, Barrie Jones in round three and now Healy in the first. The only blot on his 9 fight record was a draw against Terry Carruthers last year. Keep your eye out for Liam ‘Beefy’ Smith, looks a good operator indeed.
Former Prizefighter winner Rocky Fielding outpointed Tommy Tolan over six forgettable rounds to claim his 9th straight win.
Liverpool’s own ‘Rocky’ who enters the ring to the film’s famous anthem, certainly gets the crowd on his side, but found Tolan a tricky customer to work out and at times smothered his work trying to land cleanly on the Belfast man.
But the 24 year old Fielding was always the boss and the rounds under his belt wont do him any harm, although he suffered a cut in the fight after the heads came together and he could have done without that.
Fielding is staying busy and this fight comes hot on the heals of last month’s win against Paul Morby. Rocky is a work in progress and despite his early Prizefighter exposure and star name, he is still learning his trade and should be allowed to do so.
Fielding has good potential and if he stays busy again next year and keeps winning, he can make a move on the domestic title picture. Rocky went onto win the fight 60-54 on referee Steve Gray’s scorecard.
Rocky might not be the biggest name in the British super-middleweight picture just yet, but just might have the biggest fan following him! If the Liverpudlian boxer can fight with the enthusiasm and passion of his mate and dedicated follower Burnsey, who stands up and rides every punch with Rocky at ringside every fight, then they are both going along way in boxing. 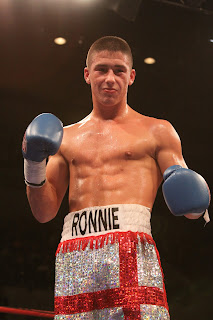 Ronnie ‘Razor’ Heffron outpointed game Welsh teenager Tony ‘The Snake’ Pace, who had come up to the Northwest with a winning mentality and ready to cause a shock. But was beaten by the former ABA champion Heffron, who is making good vibes on the British boxing scene.
The fight may have been considered a warm up for Heffron prior to his Central Area title match-up with Chris Johnson on October 28, less than two weeks away, but Pace gave a good account of himself and tried to match Heffron hook for hook, he never looked to hide and took the fight to the favorite, but the classy boxer from Oldham was always one step ahead.
Every time I see Paul Butler he seems to get better and this latest appearance was no exception, when he blew out Hungarian import David Kanalas in the first round.
The super-flyweight from the Wirral in Merseyside forced referee Mark Lyson to jump in and save Kanalas, who had no answer to ‘The Baby face assasins’ sharp power punching after hitting the canvas four times before the official had seen enough.
A left hook floored Kanalas the first time before crunching lefts to the body forced him to the canvas for a second and third time ahead of a barrage of punches which saw the Hungarian take a knee for a final time.
Butler, 22, has been rumoured to be in line for a Commonwealth title shot against Nigeria’s Yaqub Kareem in November on Frank Warrens Wembley Arena show in London. A title shot maybe a little soon for the 5 fight professional novice at the moment and should maybe come along slower but often.
But the super-flyweight division is not crammed with contenders and his amateur pedigree and ABA title triumph sets his paid career off with some very solid foundations.
Paul Butler is a name boxing fans should be looking out for, this kid will be hard to beat and it wont be long before title fights are plenty for this future star of British boxing.
Billy Joe Saunders had his first fight for five months and looked it looked like the layoff because of an hand injury hadn’t effected him too much.
Saunders made light work of journeyman Norbert Szekeres in quick time and the former Olympian from Hertfordshire will now prepare and get ready for his Southern area title fight against Gary Boulden at Wembley Arena on Saturday, November 5.

Craig Evans scored his 5th win with a one-sided points victory against Ibrar Riyaz in a super-featherweight contest.

Evans from Wales dominated his Albanian opponent from the start, catching him with good left hooks and making Riyaz miss. The journeyman shown plenty of heart to hang in there at times with Evans who gets another good win under his belt.
Welshman Tobias Webb narrowly beat Jahmaine Smyle over six hard-fought rounds battle and must be glad to see the back of the tough Smyle who he had previously met in the super-middleweight Prizefighter five months ago.
Webb overcame a cut in round three, but always kept himself ahead, but Smyle was always a danger with his right hand that the Leicester-based fighter tried to catch Webb out with numerous times especially in round two.
The referee had a few close looks at Webb’s cut and the 23-year-old was allowed to continue. Webb settled down into the fight and began to use his jab that proved to be his best way of dealing with Smyle and impressed the judges enough to take the verdict.
The Echo arena show card was packed with some star names and some up and coming prospects who’s names will soon be major attractions in the UK fight game. All in all Frank Warren and new TV channel BoxNation are continuing to take boxing forward.
By Chris Maylett
.