‘Making Haye’: Worsell’s masterpiece on Haye is a knockout read. 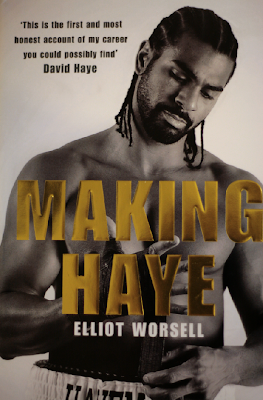 He was like other boys who had big dreams. His was to become the heavyweight champion of the world and make his family proud. Yet David Haye’s dream stayed alive in his heart long after childhood. It became a burning ambition.

‘Making Haye’ follows the boxer from his fledgling days as a prizefighter up to his intended retirement after losing to Wladimir Klitschko this July. Haye’s journey through the arduous and unforgiving world of boxing is skilfully retold by confidant Elliot Worsell, who is by the fighter’s side at pivotal stages of his professional life.

It is a candid account of the former heavyweight’s prolific rise to the top of the sport. Often a controversial and outspoken figure, his turbulent and exciting career is uncovered like never before, revealing a man determined to shake up a sport that had become static and stale.

Worsell, who starts out as an inquisitive young writer, becomes a close friend and eventual advisor to Haye over an eight-year period full of twists and turns. ‘Making Haye’ gives an insight into the mind of its star, capturing him in the tentative moments before many of his biggest battles. The heart of his secretive training camps is bared, revealing the fears and frustrations of those around him as the pressure mounts for his success.

We see how trainer Adam Booth helps strategies his assault on the cruiserweight and heavyweight divisions, remaining loyal and unfaltering even throughout the most trying of times. Haye is certainly a difficult and testing student on many occasions, but ultimately, shows the strength, wit and heart when it matters most.

Despite forging a strong connection with the prizefighter from Bermondsey, Elliot Worsell is able to stand back and cast a critical eye over the highs and lows of the former champion’s professional life. Unlike many boxing biographies, Worsell injects humour and a unique style into his personal account of ‘The Hayemaker’, analysing his performances with meticulous detail and finesse. His extensive knowledge, coupled with a genuine passion for the sport, brings the pages to life as he retells every punch and counter with uncanny accuracy.

Although this is not a first-hand account from the London pugilist, Worsell gives the refreshing benefit of an outsider’s thoughts and views, exposing the mishaps and magnificence that made ‘The Hayemaker’ such a notable champion. Fighters rarely want to delve into the darkest moments of their career, but Worsell shies from nothing over 386 captivating pages.

There are poignant moments, such as Haye’s first professional loss to Carl Thompson, when the brash fighter is forced to question his weaknesses. The story of his infamous back injury which led him to pull out of the original meeting with Wladimir Klitschko is brought to light, and of course, the eventual disappointment of his loss to the Ukrainian. It is these moments that tear away the mask of an arrogant, selfish fighter to reveal the humble side of a man desperate to fulfil his potential.

To some he will always be the loudmouth character who promised big and failed to deliver against the younger Klitschko. Yet his fearless attitude as a professional is distinct in every corner of this book. Haye set out from his early days to face the best opposition, claim the elite titles and create as much interest in a sport that was losing the public’s respect and imagination. He eliminated the opposition at cruiserweight, and instead of resting on his laurels, set to push the boundaries even further by moving up divisions.

Though his dramatic behaviour was not to everyone’s taste, he was determined to make an impact amongst a sea of monotonous and mediocre heavyweights, ensuring he reached new audiences and solidified his place as one of the most exciting boxers around. Quite simply, he stood up and demanded our attention. He made his voice heard while many watched their careers slip into nothingness.

He may not have unified the heavyweight titles, but Haye still achieved huge milestones as a cruiserweight and a heavyweight. His triumphs over Enzo Maccarinelli, Jean-Marc Mormeck and the towering giant Nikolay Valuev threw him into the spotlight as one of Britain’s premier pugilists.

The book certainly leaves us with questions over Haye’s future. Though it may be unclear where he is heading next in life, the determination and ingenuity he showed as a boxer will surely carry him far. He has shrugged off the harsh criticisms and stuck by his pact with trainer Adam Booth to walk away from the sport early. We can only watch and wait, and as many of his fans are doing, hope that he may be enticed back into a final bout with the elder Ukrainian brother.

His loyal fans and firm detractors are alike in their absolute passion, a sign that his popularity transcended boxing. Haye polarised opinion, but ultimately, became unmissable viewing. This colourful account of his life and career is as compelling and moving as any reader could wish for. The story of his perseverance against the odds to realise a childhood dream is one we can all regard with admiration.

A master of deception and pageantry, none of us were able to look away as ‘The Hayemaker’ dazzled or dismayed us. ‘Making Haye’ reminds us – if we already needed it – how much he will be missed in a sport that shone all the brighter for his short and unpredictable stay. Without him, the future of the heavyweight division looks like an overweight, bleak and repetitive nightmare.