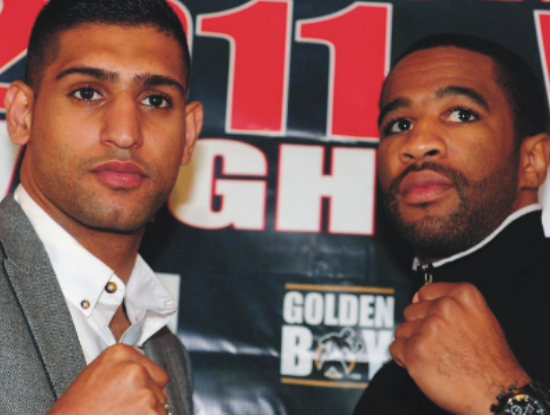 Khan given rematch with Peterson by WBA, The IBF still to decide

After the horrible fall out from the Khan v Peterson fight, that didn’t do boxing any good, in any way, the WBA have confirmed that they have ordered an immediate rematch.

The IBF have yet to give there final verdict on where they stand, an announcement from them is expected soon. It is definitely the correct decision, from the WBA and one that can try and repair the damage done to our sport.

Khan lost his WBA and IBF titles to the American Lamont Peterson on a split decision, but later accused many factors in his fall from grace that night, in Washington DC. – The Bolton boxer cried ‘foul’ after the December fight, after being controversially deducted two points for pushing, ultimately resulting in the points loss.

But then the emergence of the ‘mystery man’ on videos and pics distributed around the Internet, by Khan on his Twitter page. The ‘mystery man’ was soon identified as Mustafa Ameen!
The IBF meanwhile will hold an hearing on Thursday and will release details of there outcome. They will hear the evidence from Ameen, who went from being a ‘mystery’ to one of the most infamous figures in boxing at the moment. Ameen is said to be an unpaid voluntary worker acting for retired fighters, who have been affiliated with the IBF. – Whoever was looking after the ticket accreditation passes, gave him the best seat in the house!
From his position at ringside, Ameen was seen to be distracting judge Michael Welsh, touching his scorecard and passing him yellow bits of paper. – Whats going on! – But if the fight was called a no contest, that would be a poison, boxing’s life blood could not afford at the moment. – Our game is often brought into disrepute and it’s mutter sometimes, how boxing is corrupt! – We choose not to see this, and hope that it isn’t, but something needs to be addressed; This article is not the time and the place though!
WBA vice-president Gilberto Jesus Mendoza confirmed where his sanctioning body stand on things and without ruffling feathers, made a swift order, when he said; ‘I can confirm we have ordered a direct rematch.’
Richard Schaefer, Khan’s promoter, also confirmed the WBA decision, when he said this week, “I’m thrilled that the WBA have ordered an immediate rematch and he (Khan) is getting one and hope we can start the negotiations and get the fight done soon.
“Amir and Lamont are both terrific young men and athletes who fought their hearts out in Washington in December and I’m sure this decision will get applause by fight fans around the world.”
Full Joint statement from Golden Boy Promotions and Khan Promotions

Peterson’s split-decision victory over Khan in Washington DC has been riddled with controversy as a result of a plethora of anomalies.
Acting under its authority pursuant to WBA Rule C.26, the WBA concluded that the bout’s outcome was impacted by referee Joseph Cooper’s questionable failure to credit Khan with a knockdown in round one and his questionable decisions to deduct points from Khan in rounds seven and 12.
As further cause to order the rematch, the WBA also pointed to Mr Ameen’s apparent intrusion into the scoring process as well as possible discrepancies between the score sheets of the two sanctioning organisations and the local athletic commission.
In its resolution mandating the rematch, the WBA went out of its way to note that, under normal circumstances, it would not disturb the discretionary function of a referee.

However, in this case, because of the multiple irregularities, it was necessary for it to order the rematch.”

Khan has  hinted he would like a fight to take place in April. But there could still be another twist in this saga. Though the WBA have ordered the rematch, Peterson could still choose to relinquish the WBA belt rather than give Khan a second fight. – That could be an option they have if the IBF, allow him to keep their belt without fighting Khan again.

Peterson’s trainer and manager Barry Hunter turned the tables this week and accused Khan of using ‘foul tactics and false accusations’ to dis the new champion and undermine his achievements. They believe Khan has been a cry baby and a sore loser!

Khan though hit back at such comments when he said: ‘I think deep down he knows he lost that fight. I think he knows if he fights me again he’ll get beaten.

‘If he really thinks I’m a sore loser, come and do it again. I know next time I fight him it’s not going to go the full distance. I will knock him out.’