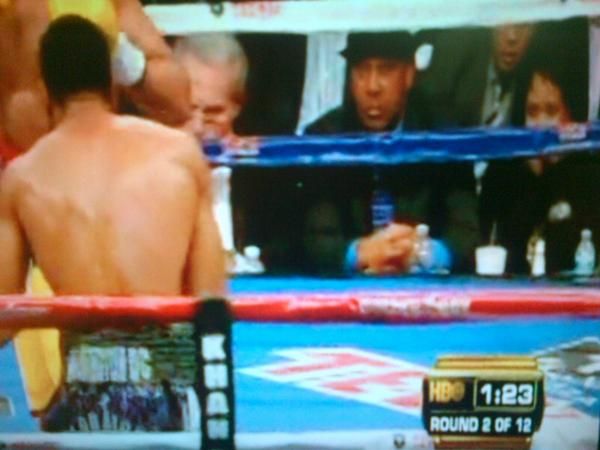 Who is the Mystery Man? It’s Mustafa Ameen! So what does that mean? 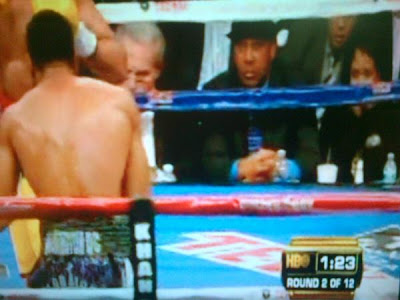 Amir Khan – Asked the Question? – Who Who is this guy? And what was he doing? – Answer! – I’ts Mustafa Ameen and whatever it is he is doing, he shouldn’t be, and, shouldn’t be sat there next to one of the judges talking to him.

Richard Schaefer has told Sky Sports that he expects Amir Khan’s fight with Lamont Peterson to be declared a NC contest in the coming days. The furor over a ringside ‘mystery man’, later revealed to be Mustafa Ameen, an IBF official who attended the fight but was not on official business and was adjudged to be distracting judge George Hill, who gave the fight to Lamont by 112-113, was started by Khan via Twitter earlier this week and now looks to have finally turned the tide in the Bolton boxer’s favour and should result in a rematch.

“His name is Mustafa Ameen and the IBF have confirmed to us his name, and that he’s involved in an official capacity with the IBF,” said Schaefer. “However, he was not in Washington in an official IBF capacity, but the IBF asked the Washington commission to issue him a credential so that he could attend the fight.

“We have been informed by the WBA that they will order an immediate rematch. We received verbal confirmation and will get a written confirmation by Tuesday.

“That means that no fighter can take an interim fight, that the next fight for Peterson would be a rematch.” Khan’s team have complained long and hard about the result, with the blame oscillating between referee Joseph Cooper, the judges who gave the fight to Peterson, errors on the scorecards, the not-so-mystery man and the fact that Peterson was in his hometown, a claim tempered by the fact that it was a Golden Boy/Khan Promotions show. Lost in all the confusion is the fact that Amir failed to fire on the night and kept committing little fouls despite knowing the ref was on his case.

Amir Khan wants Answers! However, Amir has now managed to net himself a second bite of the cherry judging by the WBA’s response, although if the fight is declared a NC the organisation can strip Peterson of his titles as they did when James Toney’s WBA heavyweight title fight with John Ruiz was declared a NC after Toney was found guilty of doping.

This case is different, unique in fact, so it remains to be seen how the WBA will handle it should the NC be declared, given their history they will probably create a new belt and name both men as champion or interim champions pending a rematch. History and the WBA’s enforcement of their rules suggests that a NC will result in the WBA title being handed back to Khan. Ironically, if the fight was judges purely on what happened inside the ring you could give the decision to either man depending on your scoring perspective, was Amir’s back pedalling effective?

Did Lamont land enough power shots to take the decision? It left more questions than answers and now looks to be set for a return. However, should Khan lose a close one the second time around there is every chance that GBP and the Bolton fighter’s team may refuse to accept the decision after the precedent set by this fight. Khan’s other option was to praise his opponent for pulling off a shock win, give credit to the atmosphere created by the fans in DC and ask the people watching on HBO and around the world to call for a return due to the close nature of the fight, he instead opted to lurch from one PR disaster to the next.

Although you cannot argue with the bottom line, the fury and persistence of his complaints looks to have led to a rematch and possibly a dangerous precedent in the sport as powerful fighters backed by the big name organisations may now attempt to overturn any and every result that they disagree with, as Oscar De La Hoya attempted to do when refusing to accept his narrow defeat to Shane Mosley in their return contest.