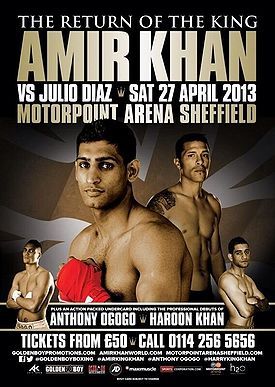 BoxNation TV will be screening live this weekends big fight cards involving British boxers in a fantastic double header which starts on Saturday from 7pm, with the UK  return of Bolton’s Amir Khan who takes on Julio Diaz at the Motorpoint Arena in Sheffield, that will be followed by Martin Murray’s world title challenge of Sergio Martinez LIVE from Argentina.

On the Sheffield bill, there is a good match-up between super-featherweight’s Gary Sykes and Jon Kays, starting at 7pm.

The headlining fight of the night, Amir Khan vs Julio Diaz, is due to be broadcast from 10.10pm with ‘The King’s’ walk-on LIVE from Sheffield.

Following the ‘Return of the King’ and before heading over to Buenos Aires, Steve Bunce will be joined by former WBO World Super-Featherweight Champion Barry Jones and Irish Middleweight Star Andy Lee for the Buncey phone in.

From 2am the action will switch LIVE to the Velez Sarsfield Stadium in Buenos Aires where St Helen’s Martin Murray faces one of the biggest challenges ever by a British fighter overseas when he takes on WBC World Middleweight Champion and top three pound-for-pound best Sergio Martinez in front of a crowd of 50,000.

Subscribers joining BoxNation this weekend for only £10 per month will also get to see Floyd Mayweather Jnr vs Robert Guerrero live from Las Vegas on BoxNation on Saturday 4th May.