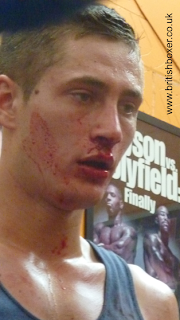 Hosea Burton has his second professional fight tonight on the undercard of Tony Bellew vs Danny McIntosh at the Echo Arena in Liverpool. And after admitting to being nervous in his professional debut in March, he is looking forward to his second outing on the big stage and hopes to pick up some new followers along the way.

Burton, 23, was a successful amateur winning a junior school boy title, two senior school boys, boys clubs and a senior ABA title before turning over to the paid ranks recently when he signed with Rotherham based promoter David Coldwell.

Burton is trained by Joe Gallagher and the Manchester prospect tells us about training with Joe and the rake of champions at Gallagher’s gym.

On his debut, a first round knockout against Bulgarian Viktor Tzonev, Burton was accompanied to the ring by many of his gym mates, including Paul and Stephen Smith and their younger brother Liam, plus Anthony Crolla and Joe Murray amongst them. Hosea says the backing helped to ease his nerves when he turned around to see the army of seasoned championship class boxers on his side.
Likened to Thomas Hearns by his coach Gallagher, Hosea is more unassuming in the comparison and although he sees the his height and movement could be something to compare, he is far too humble a lad and almost shy to be mentioned in the same breath has the all time ring legend and it is a testament to him. Hosea is a boxer with his feet on the ground and not frightened to admit he was so nervous about his debut fight that he said he would have packed it in if he had lost! But he didn’t, he in fact looked very good and blew away Tzonev with a big right hand, one could say very ‘Hitman’ esc!
Hosea is from fighting blood, he is the cousin of unbeaten heavyweight contender Tyson Fury and boxing is a family love and tradition, with his two brothers Zac and Chase also promising amateurs destined for the pro ranks too.
Interview with Hosea Burton (1 fight, 1 win) by BritishBoxers.co.uk 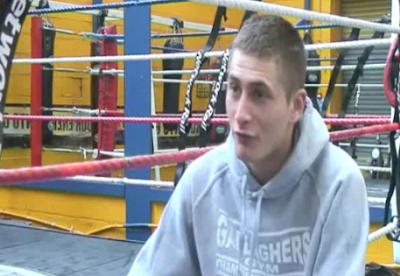 You had a good professional debut first round knockout with a big right hand, but you say you were very nervous going in?
It couldn’t have gone much better really, first round knockout. I was dead pleased with it. I missed two or three times at first trying to land the right hand because I was throwing it straight to start with, but he was moving to his left and I was over shooting it. I wasn’t trying to impress anyone in that fight, the main thing was just winning. I didn’t care how I won, even if Id won it on points, I just had to get out there and win. So that’s all the nerves out of the window now. Because I was thinking what if I go out there and get beat? because I would have packed it in then, if id have lost my first fight I would have packed it in. So that was a big pressure like lifted off.

You were a top amateur and had a very successful unpaid career, did you feel that the move to professional would be difficult or the transition may be difficult?
I know I can adjust because I’ve been in with Joe (Gallagher, trainer) for years, Ive trained with Joe since being 11 on and off but have trained with him the last 4 year permanently so I’ve had them last four years doing pro trainng so I’m pretty much adjusted to it now
In the fight you had it seemed every gym mate you could fit in from Gallagher’s, it must have been a boost to have that backing that must have helped your confidence going in too?
It did Yeah because in the dressing room I were a bit nervous. Sometimes you feel all alone when your up there, you sort of go in a trance like weak and dull in yourself but with all the lads around me it just kept my mind occupied and when I was walking to the ring all the nerves went away, cause I looked around and I started smiling. I had an army of good fighters behind me, I thought I this is alright most of em were my cornermen.

I can see how that would help you with motivation knowing that you have proven champions helping you not only in the corner but you train with them everyday too it can only help cant it?
Yeah it can, it can scare opponents a little bit as well, because if he looks and thinks ‘Oh I don’t really know much about him’ but then looks over and sees Crolla, Paul, Stephen, Liam, Joe and John and everyone and their thinking ‘well I know him and him and he’s a champion and he’s a champion he must be half alright for him to be in the gym training with em. So yeah it can help like that I think.

Your trainer Joe Gallagher has likened you to Thomas ‘Hitman’ Hearns and has been showing you the videos, do you see the comparison’s yourself?
(Smiles)  Erm.. Tall, skinny lanky like. Joe says that I can hit a bit, but Ive just started really thinking about that I can hit and Tommy Hearns was a good hitter and a mover and I’m a better mover than I am an hitter, so there maybe a little bit.
Do you think sometimes the knockouts come from the timed punches and counters, you started to stop people recently in the amateurs is that because you improved your skills or increased your power?
Yeah it was only the last couple of years as an amateur I started getting the stoppages, as a junior I couldn’t stop nobody. I was just so tall and skinny I don’t think my muscle had time to grow with my bones I was just constantly growing and I kept going weak. But yeah later on in the seniors I started to stop a few.

You have your next professional fight on the undercard to Tony Bellew vs Danny McIntosh at the Echo Arena in Liverpool, it will be a big bill for you to showcase yourself?
It is a very big bill, I’m looking forward to it, I just hope I’m on close to the big fight so every ones in watching so I can get a few more followers.

You have fighting in the blood, uncles cousins now and going back in time, your own brothers are very good fighters to are they not?
Yeah we have fighting in the blood defiantly, Ive got two good brothers who are boxing, Zac and Chase. Chase is having a little bit of time out of it at the minute. Zac’s the youngest one and he’s a very good amateur, he’s won Schoolboys, Boys Clubs, Junior ABA’s, Four nations, Zac’s won everything. He has been to 8 national finals and won seven of em, so that says alot about him.

Well good luck in your next fight and with the rest of your career Hosea, great to speak to you.
Thankyou very much.
Hosea Burton short training Reel March 2012