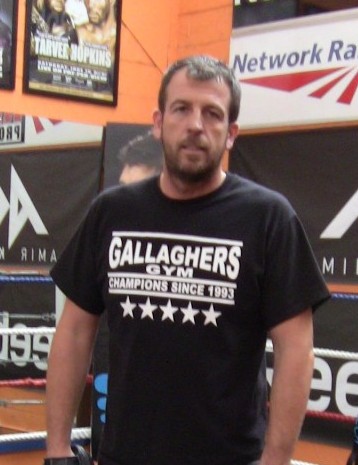 It will be another busy year for Gallagher’s gym with big fights lined up for the array of quality boxers who are coach by Joe at the gym in Bolton. We spoke to Joe this week to get his views on some of the main fights coming up for his boxers, starting this weekend.

This Friday night light-heavyweight prospect Hosea Burton (5-0) will be out in action again, but not against original opponent Carl Dilks who since this video was made yesterday, has pulled out of the fight. Burton will instead now face Sheffield’s Carl Wild at Bowlers Arena in Manchester.

Former British lightweight champion Anthony Crolla takes on the only man to have stopped him on March 30 when he battles Liverpool’s Derry Mathews for the vacant Commonwealth lightweight strap at the Echo Arena in what has all the makings of another classic to rival one of 2012’s ‘fight of the year’ Crolla was stopped last time in the 5th round losing his Lonsdale belt to Mathews, he will hope to reverse the outcome this time.

Another former British champion looking to reclaim lost honours is ‘The Real Gone Kid’ Paul Smith, who takes on old rival and now friend Tony Dodson for the vacant British super-middleweight title. A date for the fight is not yet confirmed, but it will take place before May this year. Smith defended the same title against Dodson in 2010 in his first stint as champion, winning via a unanimous decision. Smith eventually anything to get his hands back on the belt he had treasured when champion.

Potentially the biggest fight brewing for Gallagher’s gym Scott Quigg against Carl Frampton. The two unbeaten super-bantamweight stars are both on the edge of world level and world title shots. Quigg is the British title holder and Interim WBA champion while Frampton holds the European crown and the IBF inter-continental title, Quigg is unbeaten in 26 fights, while Frampton remains unbeaten in 16 contests.

It is a fight that will happen, the fight public want it, boxing wants it and the two protagonists want it, but Gallagher says it is a fight where both will be going to war and risking their careers and thus should wait until at least thee end of the year when a world title could be on the line, making the stakes and purse even higher for two of the best boxers on the domestic circuit.

Gallaghers talks to BritishBoxers about all the above match-ups in the video above.