Part 1
The cobra’s generic name, Ophiophagus,
is a Greek-derived word which means “snake-eater” It’s diet consists
primarily of other snakes, including rat snakes, pythons and other venomous
snakes. In some cases, the cobra may “constrict” its prey using its
muscular body.

When cornered, the King cobra can be highly aggressive and when threatened, it
rears up its anterior portion of its body, showing the fangs and hissing
loudly. It can be easily irritated by closely approaching objects or sudden
movements. When raising its body, the King cobra can still move forward to
strike and the attack range can be as far as 2 m (6.6 ft); it is possible for
their target to easily misjudge the safe zone. The King cobra may deliver
multiple bites in a single attack but adults are known to bite and not let go.

During an attack, the cobra’s venom is forced through its large fangs and
delivers its poisonous toxins, which begin to attack the victim’s central
nervous system. Symptoms may include severe pain, blurred vision, vertigo,
drowsiness, and paralysis. Envenomation progresses to cardiovascular collapse,
and the victim is rendered finished.

There isn’t many a boxer in the world who fight or have fought world class
opposition in their prime, fight after fight in such a way that Britain’s
super-middleweight star Carl “The Cobra” Froch has been doing for the
last 6 years, sinking his fangs into a succession of top-class fighter, with
mixed success, en route to Saturday’s win over Lucian Bute.

Froch has accumulated not only a rake of boxing awards and belts throughout his
ring life at both amateur and professional levels, but he has now without
question rose to even greater prominence after his fifth-round blow-out of the
previously unbeaten Bute on Saturday night at the Nottingham arena and entered
the realm of honour only bestowed on a few along our historical pugilistic time line.
It is a title that has no belt or trophy, no written confirmation or official
place in the record books. It is a whisper, a collective thought, a knowing of
the noble art and what it takes to get in the ring. Those who know physically
and mentally, emotionally and spiritually the pains of the fight game, they are
the mortals who entrust the accolade “A Boxer’s Boxer” to a select few.

The super middleweight division has been a competitive one since its official
inception in 1984, when Edinburgh’s Murray Sutherland became the division’s
first champion, outpointing Ernie Singletary to claim the same IBF belt, that “The
Cobra” constricted around his waist in Nottingham on Saturday night.

Sugar Ray Leonard was the first big name to grace this new weight class. Indeed,
super middleweight was set up to bridge the gap between light-heavyweight and
middleweight and to help match the boxers more evenly. Leonard knocked out
Donny Lalonde in 1988 and became the WBC’s first recognised champion.

The 1990s saw the first sign of the British monopoly of the division, when the
rivalries between Michael Watson, Nigel Benn, Chris Eubank and Steve Collins
really thrust the division to the top of the boxing entertainment charts and
cemented the validity of this new exciting weight class.

Welsh hero Joe Calzaghe carried on the super exploits of the “Fab four” by
reigning supreme for 10-years and establishing the WBO title by retaining it 21
times after winning it against Eubank in 1997. Calzaghe also won the IBF, WBC
and WBA belts before retiring undefeated with an amazing record of 46-0 and a
reign that would be hard to match in any era. Ritchie Woodhall, Glenn Catley
and Robin Reid also claimed versions of the belts in the nineties and were good
ambassadors for their titles.

The Super Six World Boxing Classic
tournament that was broadcasted by Showtime and started in 2010 was devised to
find the best of the best in a division that now had a new breed of world class
talent all laying claim to be the best, but more importantly all were willing
to prove it by facing each other and Carl Froch was chief amongst them. 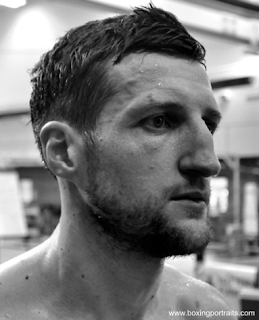 Carl Martin Froch was born on the 2nd July 1977 in Colwick, Nottingham.
He lived above pubs around the City’s council estates, which his mother ran as
landlady, and Froch was raised by what he says was a rod of iron, by his
loving, but strict disciplinarian father.

His dad also boxed and was a massive
fan of the sport and his influence certainly rubbed off on his son.

As a youth,
Froch senior was somewhat wayward and ended up on the wrong side of the law and
spent time in Borstals – youth correction facilities set up in the U.K. for
adolescent youths.


This is where his dad first learned box and apparently had over 20
fights, winning them all by knockout, losing just one, his last. His dad
was to spend a lot of time over the years in and out of prison and a young Carl
decided he was to follow only one of his father’s paths, and it wasn’t the one
that led to a Borstal.

Froch junior first tasted a boxing gym when he was 9-years-old, joining the
Phoenix ABC in Gedling. He was a happy, successful junior, winning fights up
and down the country and building up an impressive collection of trophies that
he would proudly show off to his family. He never took boxing any seriously
than that, and never understood quite where he was going with it, it was his
hobby. As a kid you don’t think about money, and contracts. You’re simply boxing
for a club with a team of friends and they are the innocent years – the ones
that bond you inextricably to the fight game and its brotherhood.

Froch has admitted to falling in and out of boxing as a teenager and says he
just played at it, not taking it too seriously. Despite this he always gave
a good account of himself. However, after losing in an ABA final narrowly
against an opponent of more experience and who went on to win a Commonwealth
gold medal, Froch knew that if he had trained properly and took his boxing seriously,
he could do something. It suddenly dawned on Froch that he was to be a boxer,
and he wanted to become the best.

As a senior he went on to win two ABA middleweight titles in 1999 and 2001 and
a bronze medal at the 2001 World Amateur Boxing Championships in Belfast before
turning professional in March 2002 with a fourth-round KO over Michael Pinnock.
“The Cobra” had started his paid legacy.

The man from Nottingham quickly showed what had to offer in those early days and
racked up nine wins on the bounce before getting a shot at the vacant English
belt against Manchester’s unbeaten Alan Page (8-0).