The
Worldwide Weekly Boxing Predictions League continues to go from
strength to strength. Since its creation just two years ago, the WWBPL
has seen it’s following on Facebook rise from just 45 members to an
astonishing 7500 (and counting).

League president Andrew
Millwall has worked tirelessly to promote, not only the league itself,
but all of it’s various members from all over the world. The league is
unique in that it allows every day boxing fans to compete and interact
with acclaimed boxers as well as writers, trainers and promoters.

League
members include the likes of Tony Bellew, Eddie Chambers, Jane Couch
MBE, Devon Alexander and legendary American matchmaker Ron Katz amongst
dozens of others from the boxing world.

In series 12 we saw one of the best and most competitive league finales ever witnessed in the short history of the league.

Long-time
Norwegian member Marius Vibe (aka ‘Per Plex’ on Facebook) was a
deserved victor after the eight-week competition, scoring an incredible
723 points. Close runners-up in second and third place were Neil Lawson
from the UK and David Holman from USA.

David Holman (3rd position)
I’m 67-years-old and married with four children. I was raised in Boston, but have lived near Philadelphia for many years. It’s been a blessing to live in two great boxing areas.

I’m currently retired and intend to remain that way for the duration !


In
my younger life I was a soldier for nine years, and started working in a
maximum security prison at the bottom level and retired as a
superintendent 32 years later.

I’ve been in the league regularly since early on. Andrew was so gently persuasive to have me join that I couldn’t resist !

I
have great admiration for how Andrew has single-handedly built this
league and managed it for so long. The tireless way he has worked to
make the league so strong is amazing to me. He also adds to the league
by being kind to others and making sure others are kind as well. He
includes thoughtful posts about birthdays and young fighters who could
use some exposure as well as trying to help others in need. I’m very
pleased to be a part of the league.

The
last league series was an amazing experience. There were so many who
could have won in the last week that the competition was fantastic. It
was the most fun I’ve had yet. Hopefully, there will be the same number
of people in the hunt at the end of the current series.

Neil Lawson (2nd position)
I am 41-years-old and have been married since 2004 and have a daughter Katie, who is six.

I
am employed as a mobile repair technician with a facilities management
company called Vinci Facilities. I am born-and-bred from Mackem (from
Sunderland Tyne-and-Wear).

I
have been in the league for the last three series and enjoy
participating to test my boxing knowledge against other members and pro
boxers who are in the league.

The league is run professionally by Andrew
and he is always on the ball to confirm your entries, results and
updating the league table and gets my total admiration for the time and
effort he puts in to the WWBPL.

I
thought the last league was very competitive, and started to watch with
anticipation as I began to move steadily up the rankings. I went into
the top 20 with three weeks remaining and thought I would be happy with
that; especially being above one of my favourite British fighters in
Tony “Bomber” Bellew. The next week I had broken into the top ten,
finally finishing in second place.

If
only there had been one more week I might have nicked the title, but
congratulations must go to the winner Marius. I will find out if my 2nd
place was a fluke in the next series (laughs).

Marius Vibe (New World Champion – 1st position)
I
am 36-years-old, married with two young children (my youngest daughter
was born the day after I won the league, so I had a good last couple of
days).

I
live in Oslo, where I work (mostly independently) as a screenwriter,
animator and illustrator amongst other things. In short, I cover a wide
field of different expressions of creativity. Someday I hope to find the
time to write more articles about boxing as well.

I
first joined the league in October 2010, in the middle of week three,
and I haven’t missed a single week since, no matter what.

There
are many reasons why I participate, but besides the obvious, my love of
boxing, I think it’s the friendly, competitive spirit of the WWBPL.

Any
internet community, once it reaches a certain size, seems to let
negative and destructive attitudes roam free, something I see no trace
of in the WWBPL. I’m not interested in typing insults at some stranger,
because he or she thinks Mike Tyson is one of the top ten greatest
fighters in history. I’m interested in boxing.

The
reason why this atmosphere is possible is, of course, Andrew, who
manages to run a tight ship and make the league a place where grown ups
can play. honestly don’t know how he finds the time, energy and
patience to do what he does, but it works. His welcoming, positive
demeanour is what’s given the league its identity, and I’m certain
that’s at the very core of its massive popularity.

Another
reason why I enjoy the WWBPL so much is the breadth of fights that are
featured in the predictions. Since the league is of an international, or
global, character, you might end up with trying to predict an undercard
fight from Ireland between a guy who’s 1-3 and a guy who’s 4-2, a
Klitschko battering from an arena in Germany, a national championship
fight from South Africa, Floyd in Vegas and an undefeated Japanese
champion taking on a dangerous puncher from Thailand….all in one and
the same week. I think this can deepen one’s understanding of the boxing
game. 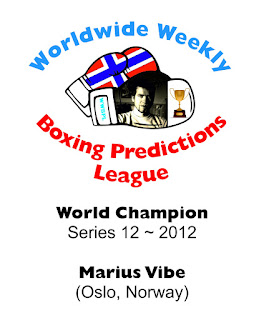 Besides, where
else could I get the chance to (accurately) predict the outcome of the
fight between Willie Casey and my countryman Andreas Evensen ?
When
you’re a boxing fan in one of the few countries in the World that still
have a ban on professional boxing….that kind of thing is special.

Honestly,
I didn’t think much about winning (this series) at all. Playing in the
WWBPL quickly taught me that it just takes one, tiny slip-up to send you
tumbling down in the rankings. In the previous league, in week two, I
was in second place, and the week after… I was tied for 157th !
Anything can happen.

But
even though the WWBPL is more about community than competition, I still
watch the same names pop-up on almost every league table, and marvel at
their knowledge and skill.

So when I saw my own name up there, in
second place, with just one week to go, I felt a strong tingle, and a
desire to finish strong and do well. I had convinced myself that I would
be thrilled to end up among the top ten, but at the very top ? It never
crossed my mind. That’s something I could never predict; and I was
about three times as happy about the win as I would’ve thought.

Footnote
Many
thanks to Marius, Neil and David for taking time out from their busy
schedules to give me their thoughts. Congratulations to Marius and his
wife on the birth of their daughter.

The
league embraces those folk that are genuine boxing fans who have
passion for the sport and our top three from this season are testament
to that. The league continues to grow and thanks to Andrew, as Marius
put so eloquently, it still strives to promote and befriend in a
positive and energetic manner.

Our
league president Andrew marries his long-term partner Lauraine this
Friday, on behalf of each and every member of the WWBPL, I would like to
wish the soon-to-be happy couple a blessed day and a long and
prosperous future together

More about the League