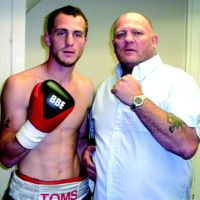 For English title challenger Ryan Toms it is his big chance and he will be looking to carry his recent good form into the fight. He is the current southern area champion again, a title he regained in July when he stopped Nathan Weise in two rounds.
Toms, 30, a former solider and footballer and once on the books at QPR, won his first 9 fights picking up the southern area belt, before being stopped in 1 round by Steve O’Meara in a shock defeat last September. His only other loss came in January this year against Joe Selkirk, when he was stopped in the 5th after suffering bad eye damage during the contest. The Middlesex man has won his last two fights by KO and his manager Dave Currivan is convinced his man can win.
“It’ll be a tough one this, but I really think Ryan can do it,” Currivan told West London Sport.
“His training’s gone really well, he’s looked good in sparring and is ready for Saturday night.
“I know Erick Ochieng from the amateurs and he’s a strong boy, but so’s Ryan so this one I’m sure will be a good fight.”
Erick ‘The Eagle’ Ochieng versus Ryan Toms will be one of three main feature fights supporting Lee ‘Lights Out’ Purdy as he challenges Gumersindo Lucas Carrasco for the vacant IBF International Welterweight title at Alexandra Palace on Saturday 8th September 2012.
Co-Headlining Purdy-Carrasco on the Matchroom Sport promoted event is Tony Bellew versus Edison Miranda for the vacant WBC International Light Heavyweight title.
Rounding out the main feature fights is Erick’s TRAD TKO gym mate, British Masters Champion Danny ‘Cassius’ Connor who faces Chris ‘The Flash’ Evangelou for the vacant Southern Area Light Welterweight title.
Supporting the four feature fights are five further bouts, heading up the list see another of Erick’s TRAD TKO  gym mates, Wadi ‘Machoman’ Camacho in his fifth pro outing against Andy Ingram.
Unbeaten duo John Ryder (11(6)-0) and Ryan Taylor (5(2)-0-1) will both be action against yet to be named opponents.
Last but not least, former Team GB stalwarts Martin J Ward and Iain Weaver will be making their professional debuts, against yet to be named opponents.
Tickets, priced £40 (Standard seated), £60 (Ringside) and £120 (VIP) for the Matchroom Sport promoted London Calling at Alexandra Palace on Friday the 8th of September 2012 are available on-line at www.tkoboxoffice.com or in person from the TRAD TKO Boxing Gym, Gillian House, Stephenson Street, Canning Town, London E16 4SA.