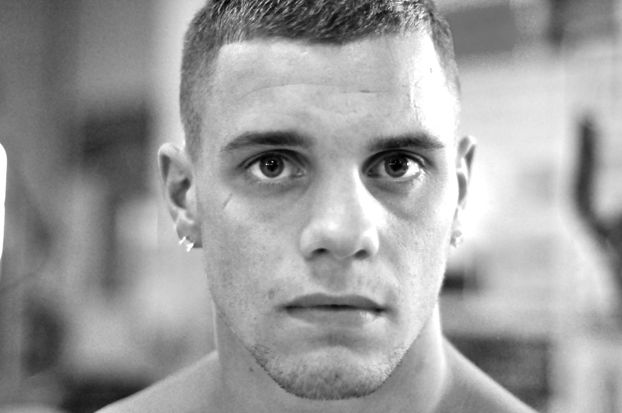 Rising prospect “Pretty” Ricky Boylan has his 6th professional fight tonight when he takes on experienced Londoner Mark McKray over 4×3 minute rounds at light-welterweight, on the Tony Conquest vs. Ian Tims undercard at the York Hall Bethnall Green (Friday September 7)
The unbeaten Surrey man this week spoke to www.britishboxers.co.uk about his boxing career to date, how he got into boxing and his aspirations for the future in a Q&A with Chris Maylett.
Q: You didn’t win any major title as an amateur, just losing out on two ABA finals, but I think it is fair to say you had quite an explosive style and was someone who came to fight and people came to watch on the amateur circuit? Do you hope to be as exciting in the pros?
A: Yeah most definitely, I got beat in the ABA London final twice as an amateur, was gutted on my last ABA’s as I thought I won the bout and could have gone a long way that year but that’s just part of Amateur boxing. I definitely think I can entertain the crowd and be a much more exciting fighter as a pro, I’m learning things everyday in  the gym with Alan and Eddie.
Q: Your amateur record was 83 fights, winning 54 you say you lost a lot of them early on in my career, why was that and what did you feel changed to start you winning?
A: Yeah I had a fair few bouts, I lost my 1st bout, won my 2nd then i think i lost 5/6 on the spin, that was when i decided to move gyms to Earlsfield ABC, I loved everyone at Rosehill ABC but just realised i wasn’t progressing. I feel Sid Khan (trainer at Earlsfield) turned my boxing career around, he spent alot of time with me, took me back to basics and started me all over again and the wins started coming in slowly.
Q: How did you get into boxing and what was your first memories of walking into the gym for the first time and who influenced you to even think about boxing in the first place?
A: I started off my own will really, my dad used to box but never told me to try the sport or anything, one day when I was around 13 I just decided that I wanted to give boxing a try and ended up walking over to my local club Rosehill ABC, I remember I was really nervous walking into the gym but once id been there that 1 time that was it i couldn’t wait until the next session, I was hooked and have never looked back since.
Q: You started at the Rosehill ABC near your house in Carshalton, Surrey, and then joined the Earlsfield ABC – Who were your trainers/coaches and what can you tell us about your time there and do you still go back to visit?
A: Yeah I started at Rosehill ABC, think I was there just under 2 yrs. My trainers at Rosehill were John Ward, Tim Ward, Keith Drewitt and Ian Gilfoor as I said loved all the people there but just didn’t feel I was progressing so I moved to a well known club Earlsfield ABC, I was there for 10yrs where my trainers were Sid Khan, Pop Khan, Bob Pearson, Andy Stables and Eric Ghandi… Earlsfield was a big club so had lots of trainers helping out all the time but Sid was my main coach, I still pop down to all the Earlsfield shows and the championships to watch the boys and they do the same for me, I’m really grateful for there support, they’ve really helped me out in all aspects of life.
Q: During the amateur’s when did you start to seriously think about going professional?
A: It was probably during my last 2yrs as an amateur that i started thinking about turning pro, everyone used to say to me that my style will suit the pro game alot better than the amateurs but Sid influenced me the most when we was on the way home from my last ABA’s in the car and he said to me and Bradley Skeete maybe you 2 should turn over and start life in the pro game…. So that’s just exactly what me and Brad done.
Ricky Boylan Career Highlights (Amateur and Pro)

Q: How has the transition been to the pros, in what ways have you adapted your training or nutritional education etc. and have you found it suits you?