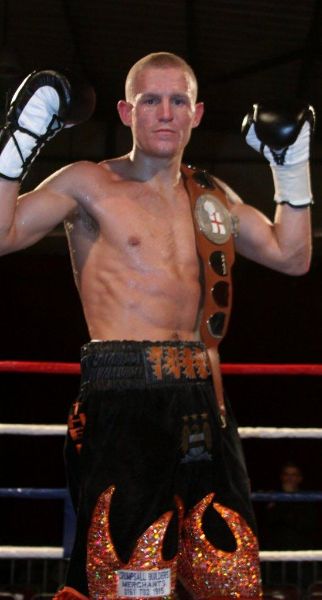 Manchester’s Terry ‘Turbo’ Flanagan had to dig deep in his toughest fight to date to overcome a game challenge for his English super-featherweight title against an inspired Troy James at Bowlers arena in Trafford Park on Saturday night.

Flanagan, 23, was making the first defence of the belt he claimed in May against Dougie Curran and in response to this hard fight, he produced his best performance to date and answered some questions with regards to his durability and determination to tough it out, when the going gets tough.

‘Turbo’ dominated the opening rounds from behind his southpaw jab and it looked like James was out of his depth, as he was constantly caught coming in by Flanagan, who was timing his shots and always out of range when the Coventry challenger lunged in.

James was conceding height and lots of reach and needed a change in tactics if he was going to have any success and a chance of pulling off the win, before an engrossed noisy crowd that threatened to blow the Bowlers roof off with their shouts and screams.

In the third round, James was trying his best to draw Flanagan into a scrap, but he was open coming in and walked onto a big right hook from the champion that shook him to his boots. Flanagan went in for the stoppage and had his man in trouble, but James survived the onslaught that followed and saw the round out fighting back.

James, 29, had recovered at the start of the next round and got himself back into it again, constantly coming forward he tried to bully Flanagan out of the centre of the ring, a place the champion had tried to make his own. The tactics began to work for James and his strength and fitness was high, and together with his desire he was able to back Flanagan up against the ropes and fire away, hurting the Mancunian with a peach of a left hook in the fourth.
The fifth round started with both landing big shots, the challenger had come out with high endeavour again and enjoyed his best round. Relentlessly coming forward he attacked Flanagan’s body, head and arms with everything he had and again stunned the champion with some hurtful uppercuts through the middle that forced Flanagan to cover up. Flanagan was smiling at James through his guard, which was deemed a respectful gesture, but it was a hard round and he had nothing to smile about.
James continued to take the fight to the champion, who had slacked off the pace now, giving James his best spell in the fight. Another competitive couple of sessions saw Flanagan worked hard by James, although he finished the rounds strong, but it seemed James was finding a way through Flanagan’s lefty stance.

Flanagan was back behind his jab and trying to dictate the action again on his terms. But James, after drawing his foe into another exchange and with his back to the ropes caught Flanagan with a big right hand that James looked like he’d loaded up in the Midlands! – It crashed off Flanagan’s jaw, his legs buckled and the champion went into survival mode on the ropes with his arms tight around his head, shipping every shot in the book as James went in for the stoppage, and the way Flanagan wasn’t fighting back it was looking like he might get it.

But his eyes were clear and although he wasn’t responding with much back, he seemed aware of the situation. It looked like Flanagan was more tired than hurt and he took a Hugh breath of air and then fired back with a frenzy of shots that stunned James back, as Flanagan got a grip of himself. It was really a small hall classic this one and was on a knife edge.
But it was Flanagan who was to find that something deep inside which would see him through the rest of the fight and go home with his title. He had found a second wind and after a rollicking from his coach Steve Maylett, in a corner that included Bobby Rimmer and Bob Shannon, he came out back behind his jab and took control of the fight again with his ears still ringing, but the telling off had the desired effect and Flanagan regained his composure going into the ninth.
A Big left in the round took something out of the challenger and his punches were falling short of Flanagan who employed some movement again. The previous session appeared to have taken a lot out of James, such were his efforts and it proved his final serious assault although he never stopped trying to the final bell.
The fight ended as it had played out, toe to toe with both giving it their all for almost every second of every round. But it was Flanagan’s boxing and sharper work that took the eye, and the final rounds in the end and even though the result had the crowd waiting in anticipation, it was clear that Flanagan had done enough to win.

But Troy James can drive back up the M6 proud of his efforts against a determined champion who had to be at his very best to retain his belt and take his unbeaten record to 15-0, 4 KOs.

Flanagan said afterwards he was happy with his performance and is looking forward to the future. He also hinted at a possible move up to lightweight in the future and would consider it, if the right opportunity came his way.

The Prizefighter the Lightweights II is coming up at Liverpool’s Olympia on October 6 and with Kieran Farrell recently pulling out of the tournament, maybe Flanagan would fancy his chances in that? Whatever the next step is for Turbo, he’s proved he will be a force to be reckoned with on the British scene for anyone.

Undercard results, reports, pictures and videos from Bowlers HERE – Follow us @britishboxers to get the latest updates immediately has they are published to the website.
Fight Pics