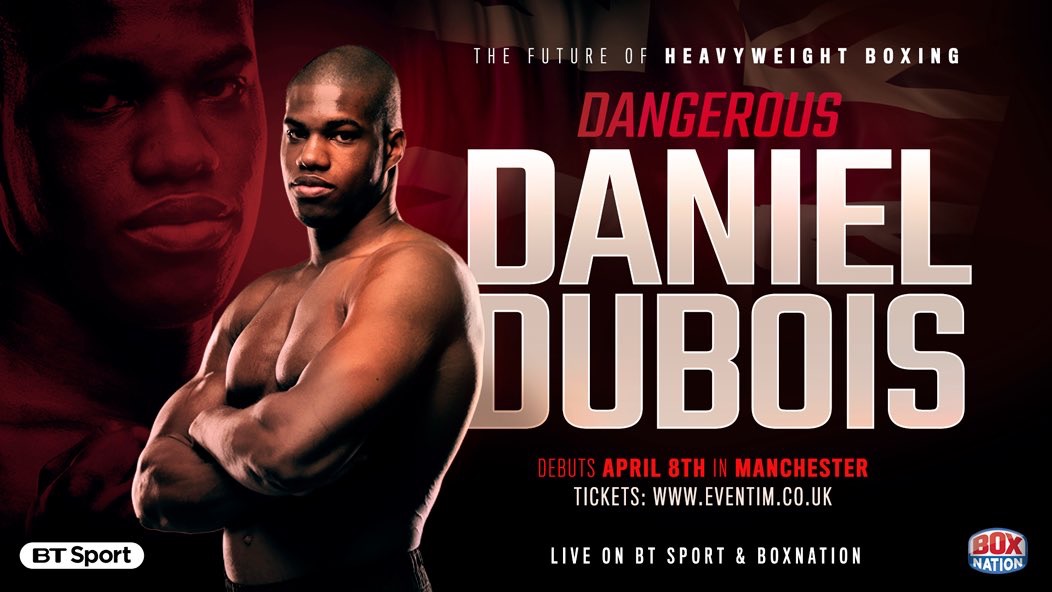 Dubois, 19, gained invaluable experience from sparring both Fury’s and is already being tipped for stardom by his Hall of Fame promoter Frank Warren, who is predicting the Peacock Gym fighter will be the future of Heavyweight boxing.

Great Britain’s amateur boxing officials were pinning their hopes on Dubois winning Super-Heavyweight Gold at the 2020 Tokyo Olympics, but the 6ft 5ins powerhouse instead chose to pursue his dream of becoming England’s youngest ever Heavyweight World Champion.

Our Interview with ‘Dangerous’ Daniel Dubois

Howe, 36, stands at 6ft 8ins and has won 12 of his 17 career fights, six coming via knockout, since turning professional in 2008. The Yorkshire giant has been in with the likes of Ricky Hatton Heavyweight protege Nathan Gorman (8-0, 7 KO’s) and most recently Doncaster ‘White Rhino’ Dave Allen.

“I’m itching to get under those lights and put in a big performance on my debut” said Dubois. “I’ve been training long and hard for April 8th and I want to kick-off my career with a bang. David Howe has a good record and has been in with some tough guys, he is a good test for me.

“To be fighting in an Arena and live on BT Sport and BoxNation in my very first fight is going to be a great experience for me. I can’t wait to get in there and perform for my team and my family. If the knockout comes, it comes.

“Getting a win is the priority. For now it is all about improving with every fight and learning my trade in the gym. Make sure you all get a ticket or tune in next week; this is going to be the start of something special!”