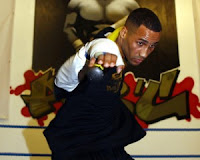 Remember James DeGale, the 2008 Olympic middleweight gold medalist who raced to 10-0 in his early days as a pro, picking up the British title en route before losing a close one to local rival George Groves?  If you don’t, then you’re going to be reminded what the fighter known as “Chunky” is all about come October 13 when he fights on British soil for the first time in almost a year when appearing at Kent’s Bluewater venue.