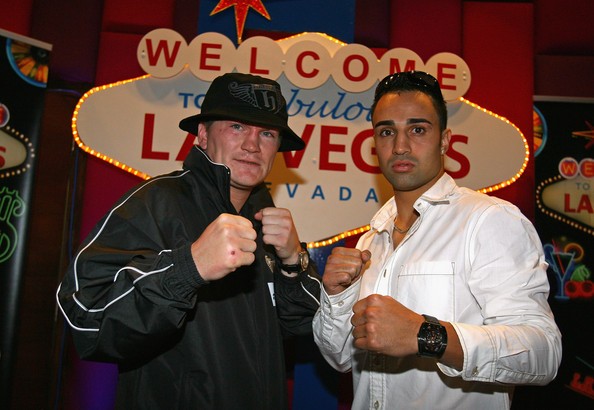 Two-weight world champ and reigning WBA welterweight king Paulie “The Magic Man” Malignaggi knows Ricky Hatton and Vyacheslav Senchenko very well having boxed both men (losing to Hatton, stopping Senchenko) and the New Yorker is currently in the U.K, set to call the fight for Prime Time on Saturday night.
Here, Paulie gives he pre-fight take on “The Hitman’s” comeback fight for Britishboxers.co.uk:
Q: You are in a unique position as you know both Ricky Hatton and Senchenko well having boxed both. Were you surprised when you read that Hatton had chosen such a dangerous, world class opponent for his return after having had 3-and-a-half years out?
Paulie Malignaggi:  Yeah, in a way I was. He could very easily have taken a lesser guy, and gone a different route – worked his way back little by little. But I think this speaks volumes about the level of competitor Ricky is. Now it’s just a case of which fighter can adjust and get it right on the night.
Q:  What does Senchenko do well?
P.M: He has a good jab, and he fights well at distance. But what he lacks, and what I was able to take advantage of is, he lacks foot speed. I could change the range and the distance constantly and I was also able to nullify his height advantage (Malignaggi stands at just over 5.8,” Hatton stands at approx 5.7” and Senchenko stands at a fraction above 5’10”). Ricky’s game-plan may not be the same as mine was; he’ll likely use his aggression – but Ricky should be able to use Senchenko’s slow feet to his own advantage like I did.
Q: Ricky has lost fivestone (70-pounds). Even though he has reportedly done it the right way, will this huge loss of weight affect his strength in the second half of the fight?
P.M:  It’s a lot of weight, but Ricky has lived well for the last year, so no, I don’t really think that’s an issue. With Ricky’s style, even in his prime he got hit a lot, so if he had continued fighting this past three years, it’s possible he might have been in worse shape. For his style, which is a physical style, he may well have taken too many shots had he continued fighting.
Q: Senchenko was a no-show at today’s press conference. Do you read anything into that at all? I remember you did say after you’d beaten him that you think you might have gotten into his head.
P.M:  Not too much, I think Senchenko is using the time to get himself focused. He knows he doesn’t really have to add anything to the promotion of this fight. But I do think Senchenko’s an emotional guy. His mind can play tricks on him. We’ll see on the night.
Q:  You busted Senchenko up badly back on April 29th. Could facial injuries play a part on Saturday night?
P.M:  Well, the fight with me proved Senchenko can be susceptible to cuts and facial injuries, but Hatton has also in the past – Ricky has pretty thin skin himself.
Q:  Is it fair to say you will be rooting for Hatton?
P.M:  Yeah, but not just as far as me and him having a rematch with him is concerned. Ricky has overcome a lot as a man and I’d like to see him do well.
Q:  You have achieved so much in your career, would a revenge win over Hatton be the icing on the cake for you?
P.M: This is Ricky’s time for redemption, mine will come later. I think it would be selfish of me to look at this fight and talk about a rematch. Hopefully Ricky does well and then the time will come for me to talk about my redemption next year. I have held a lot in about that loss (in Nov. 2008 – TKO by 11) and that is the one loss I would like to put right most of all. But the focus is and should be on Ricky right now. Call me next year, and then I’ll talk more about a rematch with Ricky.
Q:  As you have said, you are 3-0 in rematches (Vs. Juan Diaz, Lovemore N’Dou and Herman Ngoudjo), and a rematch between you two would be a big thing – in New York or over here!
P.M:  Yes, and there is a possibility it could be even bigger; if Ricky looks great in getting a win. There is a lot riding on this fight. But the way Ricky is as a person, you have to pull for him. You want to see him redeem himself and overcome his own demons.
Q:  Thanks so much for your time. Your final prediction for Saturday night?
P.M:  I think Ricky will wear Senchenko down in the second half of the fight. But I think it will be a good fight, an entertaining fight. I do feel Senchenko will come with a lot more than people perhaps think he will. I think he’s using his silent approach in a positive way and I think he’ll have extra motivation to win. From the few comments of his that I have read, he sounds confident in himself. But I thin Ricky’s crowd and his determination will get him the win.