Jim Rosenthal talks about his Career in Boxing Broadcasting 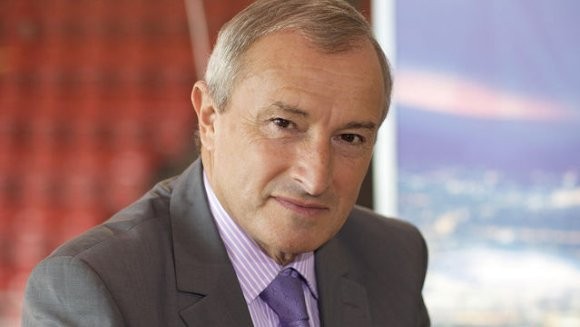 Jim Rosenthal has been the face and voice of British boxing for decades due to his presenting roles at the BBC, ITV and most recently BoxNation. Rosenthal has covered most of the big fights and worked with all the big fighters during his time in boxing. Now a jewel in the crown of BoxNation’s coverage, the Oxford-born and raised Rosenthal has enjoyed a long career, and he shows no signs of slowing down or losing his enthusiasm for “The sweet science”.

His wife, Chrissy, is a former Newsnight producer. Rosenthal’s son, Tom, studied philosophy at King’s College London, but has moved into comedy and acting rather than following his father into the tragicomedy of boxing.
“I did a traditional apprenticeship,” said Rosenthal when speaking to BoxingScene. “I did a bit of sport on the Oxford Mail and Times. Then I moved to BBC Radio Birmingham Local Radio before moving to what was Radio 2 then and is Radio 5 now. I worked with guys like Des Lynam and joined ITV in 1980.

“Before I left for ITV there was a three-week period over in America where Alan Minter was fighting Vito Antuofermo [for the undisputed middle title on March 16], Dave Boy Green was fighting Sugar Ray Leonard [the “Fenland Tiger” lost a WBC welterweight world title challenge by fourth-round KO on March 31] and John Conteh against Matthew Saad Muhammad [a rematch for Saad’s WBC light-heavyweight title on March 29 in which Conteh was stopped in the fourth], so I headed over for those fights.

“I watched Minter beat Antuofermo [by 15-round split-decision at Caesars Palace] and went from Las Vegas, to Los Angeles, where Ali lived, and on to Landover, Maryland. I had a number for Muhammad Ali, so I thought I’d try it out. Ali answered the phone. I told him who I was, that I was with a group of boxing writers and asked if we could visit him. Ali said: ‘Yes’. I asked him when we should do it, he replied: ‘Let’s do it now’. I was charged with the task of waking up all these journalists and telling them that Ali wanted to see them.

“They’re all looking at me and thinking, ‘If this isn’t right then you’re for it’. Ali gave us three-hours of his time and performed all the conjuring tricks. Ali was the world’s greatest sportsman and to do that gave an indication of the type of guy he was.”

Despite his deep love for the sport, Rosenthal understands and appreciates that boxing does not make things easy for itself, but, when it is done properly, he feels that the sport is capable of producing amazing events.

He said: “The reasons are clear to see and easy to understand, sadly, as boxing is not an easy sport for TV. If there’s a football match, two teams will come out at a certain time, they’ll be 11 players on each team, 45-minutes each half and time for a commercial break. You don’t know how long a fight will last or whether it will even take place. One or two heads of TV have bought into that and understood that the uncertainty is part of the attraction. Others won’t, and that is why commercial television has pulled away. It pains me to see so little boxing on terrestrial television.

“You have to stick with this sport to get the rewards. You have to put up with one or two mismatches or bad decisions. Then you see stuff like the recent [Miguel] Cotto and [Floyd] Mayweather build up, you see the way people react in places like Puerto Rico and America. If we lose that then there’ll be no point talking about the sport. You have to have those big occasions and fights.

“We did a series on ITV, which was called Second’s Out. This was pre-Sky and we built up the careers of men like Chris Eubank and Nigel Benn. The chimes of Big Ben would sound [for a Benn fight] and you’d think, ‘This isn’t going to go long’.

“You could move guys from local shows such as Fight Night, which was televised on Granada in the North West and Central in the Midlands, and then put them on the national stage. It was a great way of bringing talent through. I think we can do the same with BoxNation, whether we’re at Liverpool’s Olympia or Wolverhampton’s Civic Hall — we’re building up fighters to bring them through to big shows.”

Rosenthal anchored ITV’s coverage of the February 1995 WBC super middleweight title showdown between Benn, the champion, and America’s Gerald McClellan at London’s Docklands Arena. “The G-Man” succumbed to Benn’s incessant attack in the 10th. No one knew it at the time of the stoppage, but McClellan had sustained serious brain damage that left him blind and partially deaf.

“I had two sad nights with [Michael] Watson and McClellan,” said Rosenthal. “Benn and McClellan was unique because I’ve never encountered an atmosphere like it. If I’m brutally honest I never want to encounter it again because it was what it must have been like in a bear pit or bare-knuckle arena. My mate Gary Newbon helped push Benn back into the ring, it may have been stopped early, but went on and became a great fight.

“I showed my son a tape of that fight, he was astonished at the brutality. It is right up there as a pure contest between two fighters giving more than their all. It is tragic that the fight won’t be replayed because of how it ended.

“That brings us onto premature stoppages. We all complain about them, and all fighters hate getting stop, but it is an emotive moment and on reflection a lot of them are correct and well timed. There’s a lot of tired arguments about abolishing boxing, but it is a viable sport and we can never over-estimate the safety aspects and must keep revisiting them all the time.”

When it comes to calling a fight, Rosenthal believes that Watt, Reg Gutteridge, who passed away in January 2009, and former featherweight world champion Barry McGuigan were a dream team.

“Reg was wonderful, like a broadcasting dad to me,” he said. “Reg was practically brought up in a boxing ring, so he was really knowledgeable, but also really generous. His combination with Jim was a match made in heaven. I used to do commentary occasionally when Reggie wasn’t available. One of the U.S. guys came up to me when I did the commentary for Thomas Hearns against Roberto Duran and he said: ‘If Reggie isn’t here to commentate then this fight mustn’t be worth a damn!’ Barry is an outstanding expert. Fighters can go to Barry after a fight and are given a tutorial on what to do next time.”

Give or take a few tricky moments with enigmatic characters, Rosenthal has enjoyed almost every one of his experiences in boxing. He said: “There was once a half-interview in Atlantic City with Mike Tyson. I came down for breakfast, looked across at Tyson, he gave me a look that made me think, ‘I’m not going to get this interview — I’m probably lucky that he made it out of his room’, and for whatever reason we didn’t do it.

“Maybe he was going through one of his dark periods. Tyson is the only fighter I’ve felt vaguely threatened by. The Tyson of the mid-1980s was fantastic, it was quite sad how he went down, but I don’t think I’ve ever sat down and had the pleasure of interviewing him properly since he sorted his life out. In the 1980s was an astonishing fighter, but people made the mistake of remembering him as he was late in his career rather than the fighter he was. It was quite sad to see him lose it all so quickly.”

He added: “I’ve never had an uneasy moment in the sport if I’m honest. I’m flattered to still be associated with it. We’re all doing our best at BoxNation to grow it. The sport of boxing having its own dedicated channel, no matter who fights on it, is great for the sport and I hope that in time every promoter wants to be on the station because if any other sport had a dedicated channel it would be cause for celebration. We’re still finding our way, but it has to be a plus — I can’t see any argument against it.”