Groves dominates Johnson and wants a shot at Froch in 2013 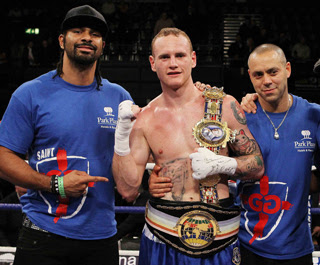 George Groves outpointed veteran Road Warrior Glen Johnson to retain his Commonwealth super middleweight title via a comfortable unanimous points decision at the ExCel Arena on Saturday night.
The 24-year-old Londoner won every round according to two of the judges scorecards, while the third official gave one round to the Canadian based Jamaica.
Former world champion Johnson, now 44 years-old has only been stopped once in his professional career went down in the final round, but looking back on the replays it shown that it was actually a slip, despite the referee counting it as a knockdown. Final scores on the night read; 120-107 120-107 119-109.
“That performance will tell the rest of the division that I’m here, that I’m a contender and someone not just to keep an eye on, but to fear,” Groves said after the fight.
“I will give anyone in the world a decent fight and would beat a lot of the top guys. I believe that now I’m a world class fighter.
“Johnson has boxed at the highest level for a long time, and at light heavyweight as well. The good fighters he’s beaten is impressive. “I can look back at this year and say I’ve only had two fights, I’ve had two successful fights and have made big improvements.”
“There were times when I was absolutely nailing him and 95% of other super-middleweights would have gone, but he stood there. I genuinely thought I’d stop him. I didn’t underestimate how good his chin was, but he can really take a punch.”
The victory sees former British champion Groves stretch his unbeaten record to 16 fights, with 12 KOs and it was a job well done against a seasoned fighter and respected opponent whose 71-fight professional record includes wins over Roy Jones and Antonio Tarver and it was only in June last year he pushed our current world champion Carl froch all the way and Groves feels he is now ready to step upto world level and is eyeing a fights with Germany’s WBO champion Arthur Abraham and British rival Froch in 2013.
“I’m not far off a world title fight and if something came up I would take it.” added Groves.
“I have had sixteen fights and I’m only 24. If I could get a couple more like that it would be great experience. But I would take a world title fight with both hands if it comes up.
“I’d love a crack at Carl (Froch) He’s been such a great champion and he’s said he only wants a few more fights so I’d love to be one of them and I’d fight Arthur Abraham tomorrow.

Late replacement Liam ‘Beefy’ Smith outpointed Steve O’Meara to pick up the Commonwealth light middleweight title In a competitive battle between two boxers with ambitious intent. But it was Smith who took the win on the judges cards who had it 112-116, 110-118, 112-116 all for the new Liverpool champion.

Frank Buglioni beat Ciaran Healey at super-Middleweight after Healy retired at the end of the second round.