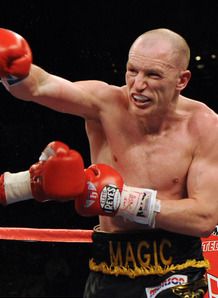 Weeks before beginning preparations for his March IBO world title showdown with Chris Van Heerden, Manchester’s Matthew Hatton has joined forces with Dave Coldwell after inking a management deal with the popular Sheffield promoter.
The former European welterweight champion topped one of Coldwell Boxing’s shows back in October when he ruthlessly dismantled London’s Michael Lomax in the opening session and he’s happy to have Coldwell providing direction for his career.
“Me and Dave go back a long way and I trust him 100% to go out there and do what’s right for my best interests,” said Hatton. (pic left)
“He’s been putting on some great shows in Manchester recently and everyone knows that I like nothing better than fighting in front of my home supporters so I’m hoping that maybe we can get another few good nights in Manchester. Dave’s really flexible with other promoters so ther should be nothing holding me back in getting me big fights in the future.”
First up for Hatton is the South Africa showdown with the aforementioned Van Heerden and Hatton is well aware that victory could provide the platform for bigger fights in 2013. After falling short in his previous world title attempt against Mexican superstar, Saul Alvarez, Hatton believes he is a better fighter for the experience and remains insistent that he
is a world class fighter.
“I think I’ve proved to people that I’m more than capable of competing with the best fighters out there and I genuinely do believe that I’m a world class fighter. At the moment, I’m fully focused on going to South Africa in March and winning the IBO belt and once I’ve got my hands on that then myself and Dave can start looking at bigger fights and maybeeven look at some sort of a unification. There are massive fights out there for me both home and abroad and I’m confident that 2013 will be a great year for me.”
Interview with Matthew Hatton on his Boxing Career