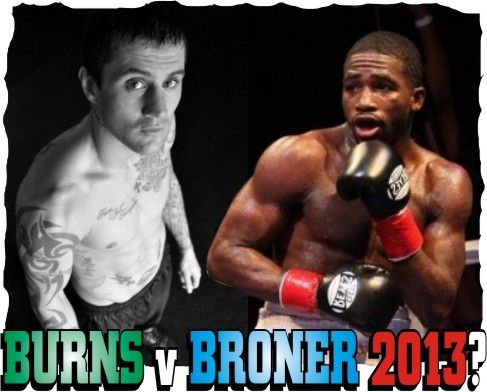 Ricky Burns-Adrien Broner Could Happen Next Year – Can Ricky Solve “The Problem?”

Though Scottish hero and reigning WBO lightweight king Ricky Burns is understandably upset to not be fighting this Saturday night what with original challenger Liam Walsh suffering injury in a car crash replacement foe Jose Ocampo also pulling out, and finally, Derry Matthews saying no thanks to the late call), there is a massive fight out there for him for 2013: one with the latest wannabe superstar of boxing, Adrien Broner.
Burns and Broner have something of a history, as Ricky vacated the WBO super-featherweight title he held last year, due to his titanic struggle to make the weight (although Broner fans claim Burns moved up so as to avoid Broner, who was then, as he is now, his mandatory challenger wit the WBO). Now that Broner – known as “The Problem,” and looking for all the world like the second coming of the superb Floyd Mayweather Junior – has picked up a major title at lightweight, the fight is bigger than ever.
And with Burns, 35-2(10) now remaining idle until next year, Broner’s promoter, Richard Schaefer of Golden Boy, is hoping the fight can be made for February 16th, at The Boardwalk Hall in Atlantic City.
“I spoke to Frank Warren,  and I’m going to have further conversations this week as Frank will see what exactly is going to happen,” Schaefer to Ring.tv.com. “But there is a possibility that now, assuming I could make a deal with Frank, that we could move directly into a Broner Vs. Burns fight  on February 16th from The Boardwalk in Atlantic City.”
There has been talk of Burns returning to the ring in January instead, and if this is the case the Broner fight have to wait a little longer. Still, this mouth-watering match-up is simply one that has to happen at some stage Broner, as cocky and as arrogant as you could imagine – though proving more and more that he is capable of backing up his brashness – is the complete opposite of the quietly confident Burns. The fight, if it goes ahead, would pit two contrasting ring styles against one another, too.
Broner, 25-0(21) is a master at not getting hit, while the incredibly fast 23-year-old from Cincinnati also carries genuine power in his laser-like fists. His flawless taking apart of the tough and proven Antonio DeMarco back in November (for the WBC title) was something to see, and Burns will no doubt have been hugely impressed with the display. So far, Broner has shown no weaknesses and he has some good judges predicting all manner of lofty things for him. But Burns is a man only a fool would
write off.
Incredibly strong, both mentally and physically, 29-year-old Burns would also enjoy a height advantage over his American rival (Burns is 5’10,” Broner is 5.7.” Interestingly, though, Broner has a slightly longer reach). Burns is also hitting harder these days, as his quick destruction of the talented Kevin Mitchell proved last time out.
This tantalising fight will perhaps come down to who is able to make it his kind of fight. Burns would need to press Broner, rough him up, make him work and also test his as yet untested chin. Broner would no doubt look to take his time, pick his punches as openings presented themselves and then come on strong in the second half of the fight. In my opinion, this fight would be the biggest test yet for both
men.
There have been a number of disappointments here at the end of 2012; what with Burns having no-one to fight this Saturday, the Lee Purdy-Carson Jones fight also being postponed and now news that Kell Brook’s challenge of Devon Alexander will almost certainly have to be postponed (set as it was for January, many fans having already made arrangements to travel to Los Angeles) – but a Burns-Broner showdown would really light up what could be a great 2013 for British boxing.
True international stardom awaits Ricky Burns. If only he can solve “The Problem.”