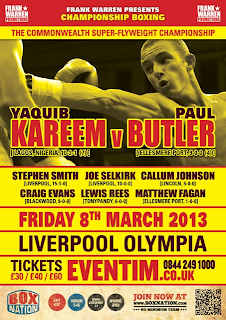 23rd January 2012
Ellesmere Port star Paul Butler aims to become a double champion on Friday 8th March at the Liverpool Olympia when he challenges for the Commonwealth Super-Flyweight Championship, live and exclusive on BoxNation (Sky Ch. 437/Virgin Ch. 546).
Butler, who won the British title last November defeating John Donnelly in the opening round with a crushing body shot, must now face the tough Nigerian Yaqub Karim who holds the belt.
The 24-year-old has marked himself as one of the best young fighters to watch out for in Britain with eye-catching performances that have thrilled fans.
Unbeaten in nine fights with four KO’s, Butler is eager to put on another devastating show, but has promised not to be careless against the teak tough Karim.

Big-hitting Karim has stopped seven out of his 10 wins, with only two losses and a draw.  He won the title in August in 2011 with an eighth round stoppage of Cobbina Johnson.

“After winning my last fight against Donnelly in the first round the temptation is to go out all guns blazing and try to take Karim out,” Said Butler.
“But he’s the champion and he deserves respect, I’m expecting a hard fight against him, he’s a tough African and he won’t be coming over here to just give up his title without a fight,”
“The opportunity to become a double champion by winning the British and Commonwealth belts in successive fights is a big motivator for me and I’ll be looking to do Ellesmere Port proud on the night,”
“The title fights are coming in fast now and it’s tempting to look too far ahead, but I’m focused on Karim and beating him before talking about the next step.”
Butler’s trainer Anthony Farnell, the former WBU World Middleweight Champion, is excited by his protege’s development but has urged caution against Karim.
He said, “This is a hard fight for Paul.  African fighters are tough warriors, just like the Mexicans, so this will be a great learning fight for him as he heads towards world level in the next 12-18 months.  Paul’s skills are improving everyday and his power week-by-week, I’m pleased how he’s coming along and I’m confident in the next few fights he’ll be the best in Europe.”
Butler v Karim headlines a quality packed that features Liverpool ace Stephen Smith in a six round contest; undefeated Liverpool light-middleweight Joe Selkirk; 2010 Commonwealth Games Champion Callum Johnson from Lincoln, plus Ellesmere Port talent Matthew Fagan in his second professional fight.  Two of Wales’ best unbeaten prospects, super-featherweight Craig Evans from Blackwood and light-welterweight Lewis Rees from Tonypandy both feature on the undercard.
Tickets priced at £30, £40 and £60 are available from Eventim on 0844 249 1000 or www.eventim.co.uk
Butler v Karim is live and exclusive on The Home of Champions BoxNation (Sky Ch. 437/Virgin Ch. 546).  Join at www.boxnation.com