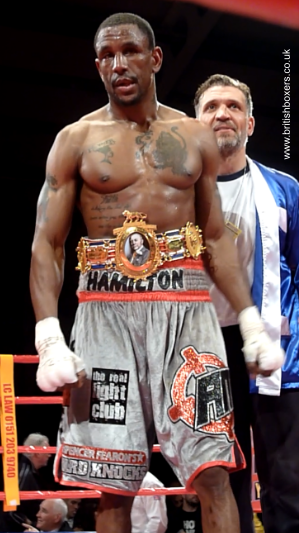 We all like a success story and in British light-welterweight champion Darren Hamilton we’ve had just that. A man who has turned around his boxing career his life and his overall status, coming through adversity and early defeats to reign supreme at the top of the domestic 10st division.

At 34 the fruits of Hamilton’s labours are riping relatively late in boxing years, but with just 15 pro fights to his name he is in the form of his life, after cementing his grip on the Lonsdale belt by dominating local challenger Steve Williams in the first defence of his title, winning a wide points decision last Saturday night at the Echo Arena in Liverpool.

Hamilton won the title against Ashley Theophane in May last year in Liverpooland before that outpointed another Scouser in John Watson; Merseyside is becoming a happy stomping ground for the London based Bristolian and against Williams he has never looked better.

Williams was made the favourite going in and on home soil was expected to be too strong for the champion. But that was never the case and Hamilton took control of the fight from the first bell and dictated the action, always out of range, keeping Williams on the end of his accurate punches he punished Williams for every mistake he made coming forward, the challenger looked lackluster and just never got going finding it impossible to suss out Hamilton’s style and was made to eat punishing right hands all night, key to Hamilton’s tactics.

Williams at times looked like he could have been pulled out of there he was never stunned to his boots, Hamilton isn’t a big one punch knockout artist but the volume and accuracy of his punches began to mark up Williams’ face and the fight could have been stopped earlier on compassionate grounds, but in the end Williams bravely saw out the fight to the end.

A few years back qualified fitness coach Hamilton was broke, homeless and having to take residence in John Rooney’s gym in exchange for helping to sweep up and take personal training classes. He had give up his job at Asda to turn professional in 2006 with Chris Sanigar in Bristol before moving down to London where he hooked up with Spencer Fearon and coach Harry Andrews and set out on his quest to make a proper go of professional boxing become a champion and make some money from the hardest game in the world.

Hamilton is determined for the good fortune to not end just yet though and has designs on winning the British title outright and moving onto European and world level before his story is over and would you write him off?

On form Hamilton with his awkward counter punching style and tight defence will be a difficult fight for anyone over 12 rounds and having the status of champion seems to have filled him with a new found confidence and belief and it will take a good fighter and a special performance to take that Lonsdale belt away from him.

Next up for Hamilton is likely to be a defence against Leeds’ Adil Anwar.
Other results from the Echo Arena
Kevin Satchellbeat Luke Wilton on points over 12 to retain his British title – more details soon
David Price lost to Tony Thompson TKO2 read more
Adil Anwar beat Lance Sheehan TD 6
Louis Cuddy stopped Ferenc Zsalek in round 5
Sean Dodd stopped Ross Payne in round 6
Steven Lewis outpointed Craig Kelly over 4 rounds
Andy Colquhoun outpointed Abdul Rashid over 4 rounds
David Burke was stopped by Dean Mills in round 4
Follow us on Twitter: @britishboxers