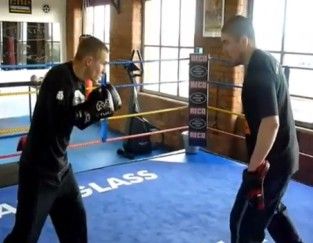 Chris MaylettFebruary 3, 2013
InterviewLATEST BOXING NEWSPaul ButlervideoVideo Interviews0 Comments1 min read
BritishBoxers speak to current British super-flyweight champion Paul Butler (9-0) at Arnies gym in Manchester where he trains with coach Anthony Farnell.
Butler, 24, won the Lonsdale belt when he stopped John Donnelly in the first round back last November. Next he takes on Nigerian Yaqub Karim for his Commonwealth title on 8th March at the Olympia in Liverpool and Paul is confident of adding that to his treasured Lonsdale belt, before making a bid to push onto world level in the next year or two.
Find out about Pauls career to date, his favourite fight and fighters, toughest opponent he has faced, the good and bad things about being a boxer and what makes the Ellesmere Port man tick out in and out of the ring in this exclusive interview;
Follow us on Twitter for more future interview updates: https://twitter.com/britishboxers