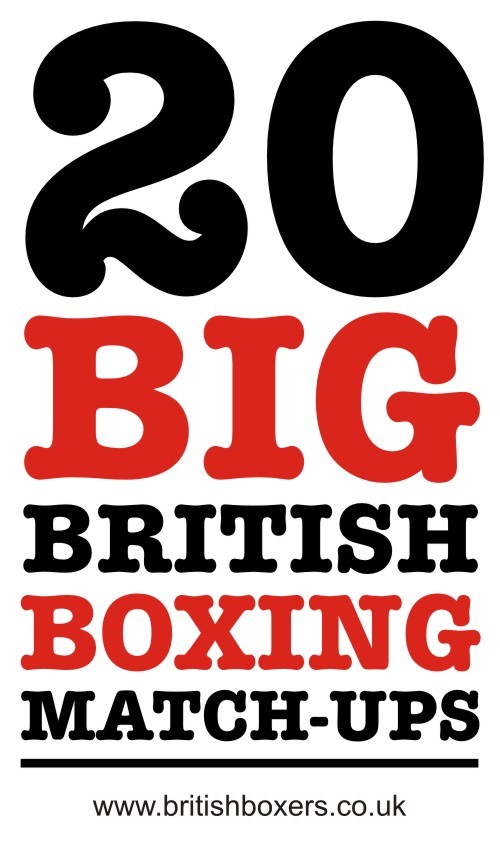 20 Big British Boxing Matchups That Have To Be Made

Former British lightweight champions Derry Mathews and Anthony Crolla are never in a dull fight, so it was inevitable when they met each other last year we were in for a fight of the year candidate.

Both have been trying to monopolise the FOTY selection process for the last few years. So when the two signed to fight again on May 30th, boxing fans welcomed the news, knowing a return has all the ingredients for another epic encounter, a fighters fight and one every serious fight fan is looking forward to.

So with this contest being made quiet easily and both willing to lay it all on the line again including their careers, we take a look at other domestic all British showdowns that would lighten up our game no end.
. Link:
– British Boxing Rankings

Both failed to agree a deal to fight and a meeting looked far away as both went on their separate routes to the top. Unfortunately Price (15-1, 13KOs) was knocked out in his last fight against Tony Thompson losing his unbeaten record and scuppering any immediate plans to face Fury has he rebuilds. But is a fight with Fury still as big as it was before his loss to Thompson? Fury’s next fight is against Steve Cunningham in April on his American debut, it is a world title eliminator and Fury (20-0, 14KOs) will not be looking back if he wins big against Cunningham. But if Price can get a few wins under his belt, Fury v Price is still a big fight and one everybody would want to see regardless.

2: Amir Khan (Bolton) v Kell Brook (Sheffield)
These two have already publicly stated their dislike for each other and the rivalry simmers with a future meeting one day hopefully coming to boiling point. Khan (27-3, 19KOs) is concentrating on re-claiming his light-welterweight world titles and chases a rematch with Danny Garcia who dethroned him last year. Brook meanwhile is lined up to challenge IBF Welterweight champion Devon Alexander in May and is primed to prove he really is the ‘Special One’ – If Khan can regain his titles at 10st his plan is to move up to welterweight to chase his dream of winning world titles at two different weights. Or maybe if Brook (29-0, 18KOs)defeats Alexander and Khan’s rematch with Garcia doesn’t materialise maybe he could be tempted to move up sooner rather than later. If time lines cross favourably, things here could get real!
3: Carl Froch (Nottingham) v George Groves (London)
British super middleweight king Carl Froch’s career success, may well have eased the frustration he once held at never getting to fight his predecessor and former super-middleweight ruler Joe Calzaghe, when the Welshman was coming to the end of his reign and the ‘Cobra’ was looking for his break out win against his fellow Brit who was holding the top spot he craved. Calzaghe retired undefeated 46-0, 32KOs) in 2008 after defeating another ring legend Roy Jones, a month before Froch won the vacant WBC title against Jean Pascal. Froch (30-2, 22KOs) continued to call Calzaghe out of retirement but he never took the bait and was content to retire with his legacy intact. But does the fact they never met leave a void in the linage and how much does it still nark Froch? Does it bother him enough to not let history repeat itself and will he give the new No1 British challenger to his status the chance that Calzaghe never presented him? Groves (17-0, 13KOs) is without doubt a worthy challenger, he proved his credentials against DeGale and as looked fantastic in recent performances, a world title shot is certainly coming into sight and signing with Matchroom, the same promoters as Froch makes the fight easier to make. But for now the Top man in British boxing has bigger fish to fry and is fully focused on his rematch with Mikkel Kessler in May and then will look to get a return with Andre Ward if he gets through the tough Dane. But Groves will always be there and will always dream of his chance to fight the old guard just like Froch did, will history repeat? Will Froch let it?

This could well be the fight British boxing fans would most like to see at the moment if prompted. It is a fight that could be made and should be made. The No1 and No2 super-bantamweights in Britain are both unbeaten and both and the verge of world title fights. Manchester’s Quigg (25-0,18KOs) is the current British champion and holds the title as the WBA Interim world champion. Frampton (16-0,11KOs) from Belfast boasts the European and Commonwealth crowns as well as the IBF Inter-continental belt, both ultra talented professionals, its hard to slip a cigarette paper between them and only when the pair meet can the arguments stop. This fight will happen but when? Should it wait until it is worth bigger stakes? Or will it ever get any bigger than it is now?

Both these Lonsdale belt holders from Merseyside have stormed through to rule their domestic weight classes. Satchell (10-0, 2KOs) is the current British and Commonwealth flyweight champion, Butler holds the British super-flyweight belt and is lined up to fight for the commonwealth strap in April. The two domestic divisions don’t boast the kind of packed talent the higher weight classes do and both young men will eventually develop and look at moving up divisions. Should Satchell dominate this year and cement his position, he may soon seek the bigger fights and challenges at the bigger weights. If Paul Butler (9-0, 4KOs) is still at super-flyweight then there is no bigger fight for both.

17: Martin Gethin (Walsall) v Terry Flanagan (Manchester)
In last years lightweight Prizefighter tournament, English champion Terry Flanagan (19-0, 5KOs) stepped up from super-featherweight to win the trophy beating former British champions Derry Mathews and then Gary Sykes in the final to claim the coveted trophy. Since then no offers came Flanagan’s way. After deciding to stay at lightweight and chase a British title shot at 135lbs, Flanagan has landed a fight with former undisputed lightweight champion Nate Campbell and a win will have him chasing that British title shot. Martin Gethin (24-3-1, 11KOs) claimed the vacant British title in January stopping Ben Murphy in the 9th and is lined up to defend it against Tommy Coyle next month. Coyle will be a stern test for the new champion in his first defense and should he win, a match up with southpaw Flanagan would make for an interesting clash of styles and skills between two technical boxers.
18: Darren Hamilton (Bristol) v Adil Anwar (Leeds)
This fight has already been put out to purse bids and is likely to take place before the end of June which is good news for British fight fans. This fight may not look like being a classic on paper, but it does carry a certain degree of intrigue. How good is British champion Hamilton? (13-2, 3KOs) On his last two performances, very good! He won the Lonsdale belt by outpointing Ashley Theophane in May last year, before successfully defending the strap against Steve Williams last month. Against Anwar, Hamilton will be making the second defence of the belt and will have a tough fight on his hands. Anwar (19-1, 7KOs) is in great form and deserves his shot at the British title and will be a dangerous test for the champion. This one is a real pick’em and will show us just how good the other is and which one will rule over the domestic light-welterweights.
19: Richard Towers (Sheffield) v Ian Lewison (London)
This is a fight that has edge! Both of these big British heavyweight contenders have been having a war of words out of the ring, flinging insults at each other over Twitter, with a genuine mutual dislike that would bring about a passionate encounter if they met.  Richard Towers (14-0, 11KOs) – Ian Lewison (7-2-1, 4KOs)
20:Brian Rose (Blackpool) v Liam Smith (Liverpool)
It looks like Brian Rose (22-1-1, 6KOs) will give up the Britsh light0middleweight title after his next fight with Joachim Alcline. Rose has won the Lonsdale belt for keeps after making the required three defences and now sits at the top of the 11st domestic scene. Commonwealth champion Liam Smith (13-0-1, 5KOs) is just parked right up behind Rose in the British rankings and this would be a real fight if it were to eventually occur.
Fight for the Furure!
Kal Yafai (Birmingham) v Kid Gallahad (Sheffield)
A Cat amongst the pigeons here! – This is a fight that wont be happening soon, but looking to the future it is a fight that could happen. There is only 4lbs between these two exciting talents, who are tipped by many experts to be the future of British boxing and such are the skills and potential they have shown to date. Both unbeaten if it stays like that and they both crave domestic dominance a meeting in the next couple of years may not seem as far fetched as it does at the moment. Kal Yafai (7-0, 6KOs) – Kid Gallahad (13-0, 6KOs)
Other notable mentions and fights that are either made or are put out to purse bids are;
– Paul Smith Jr. v Tony Dodson – British super-middleweight title
– Tony Bellew v Bob Ajisafe – British light-heavyweight title
– Billy Joe Saunders v Matthew Hall – British middleweight title
– Prince Arron v Nick Blackwell – British title eliminator
– Lee Purdy v Junior Witter – English welterweight title
– Shane Singleton v Tyrone Nurse – English light-welterweight title
– James Dickins v Jon Fernandez – English super-bantamweight title
Is there any other all British Fights You Would Like To See?