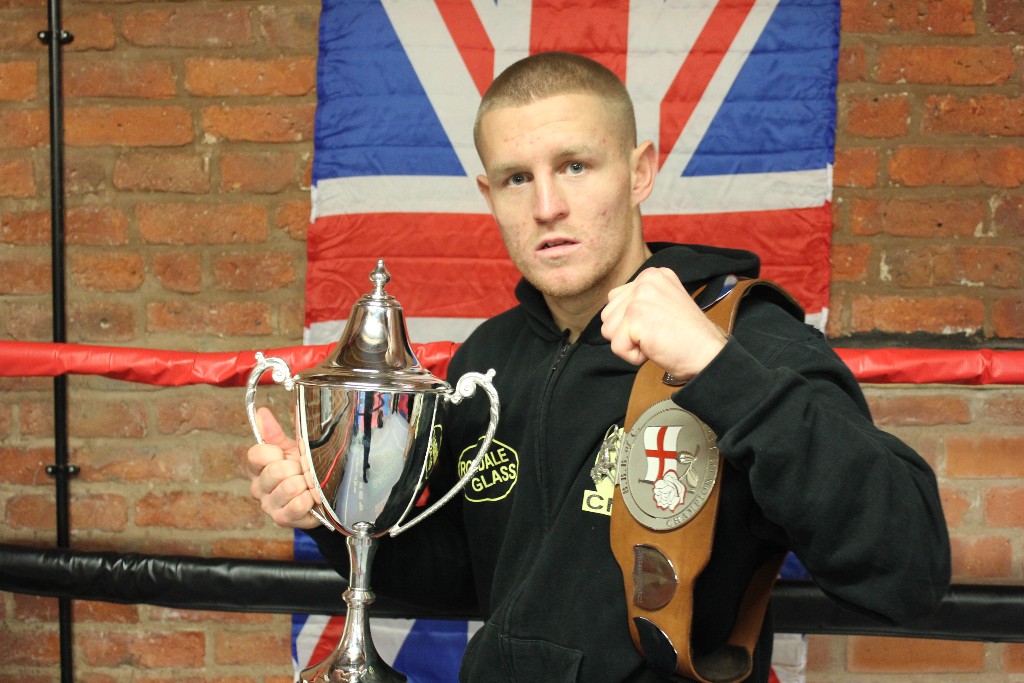 Former English super-featherweight champion Terry ‘Turbo’ Flanagan is preparing for the biggest night and fight of his life against former undisputed world lightweight champion Nate Campbell – For the WBC International light-welterweight title on the undercard of Amir Khan v Julio Diaz at the Motorpoint Arena in Sheffield this weekend, April 27.
Unbeaten prospect Flanagan, 23, from Ancoats in Manchester (19-0, 5 KOs) stepped up to lightweight in October last year to win the Prizefighter trophy and his camp was hoping that the Prizefighter win would propel ‘Turbo’ into a domestic title shot, with the British, Commonwealth and European belts at either super-feather or lightweight in their sights.
But nothing materialised for them and the phone didn’t ring with any offers. Flanagan had defeated former British champions Derry Mathews and Gary Sykes on his way to winning Prizefighter and felt he deserved his chance to step up from his then English championship status.
But two weeks ago a call did come through and the name Nate Campbell was put to Flanagan. The 41 year old American ring general, who last March rolled back the years and hit great form, stopping one time Dominican Republic prospect Victor Cayo in the 6th. The fight as now been agreed and Campbell will be coming over to the UK with plenty of ambition despite his years, and will want to put in a performance on a show that will be being beamed Live back to the States and around the world, giving Flanagan great exposure and the chance he had been craving.
Campbell has been in with a host of big names during his distinguished career including; Joel Casamayor, Timothy Bradley, Victor Ortiz, Danny Garcia and Juan Diaz who he beat in 2008 to claim the IBF, WBA and WBO lightweight titles. In his last couple of fights Campbell has been campaigning at light-welterweight and his last fight was at welterweight.
Flanagan gave up his English super-featherweight title this week and will now fight as a lightweight, believing his options and the bigger fights, lie at the higher weights. The offer to fight Campbell on this Golden Boy/Khan promotion was first set to be at lightweight, but will now be fought at catchweight after both parties agreed to meet half way at 9st 11lbs, but it will be classed as a light-welterweight contest.
Flanagan is quietly confident and just happy that he has got a fight sorted out after months of waiting. “Ive been in the gym pretty much constantly since I won the Prizefighter and I had that tick over fight in December with that Mickey Coveney. I then had a couple weeks off over Christmas and since then Ive just been working hard with Ste.” (coach Stephen Maylett). Flanagan told BritishBoxers today.
“Any weight! I just want to fight.” added Flanagan when talking about what his preferred weight class was? “I could still make super-featherweight if I had to, but at lightweight me and Steve agree there are bigger fights and it gives us more options.
“I don’t mind stepping upto light-welter if the opportunity comes my way and I’m glad this fight is now sorted. – l will fight at middleweight if it was the right fight and that’s not me ‘playin the biggen,’ –  I’m a boxer and I just want to box and keep busy, it’s my job and how I want to earn a living.
“At the moment I’m still working full time as a Scaffolder , that’s my trade, but if I can get the bigger fights I can quit my job and concentrate on boxing full time.” added the down to earth straight talking Flanagan.
When asked how happy he was to be fighting a former world champion and big American name on a hugh show, Flanagan said: “To be honest I’m just glad Ive got a fight, I love training and will stay in the gym all day everyday, but it’s nice to know you have got a date to aim for and you know who you are fighting.”
“I was prepared to stay at super-featherweight if the British title fight came, but it didn’t and then after Prizefighter I thought I’d maybe get a shot at the lightweight British title but I didn’t so I’ll take this fight and see how it goes.
“I just listen to my coach, if he says your fighting him or I think you should move up then I will, Steve has guided me this far so I leave the choice of opponents to him he knows best.

“I know he (Nate Campbell) is a former world champion and as fought some good names so yeah I’m happy I can test my skills against someone who has been there and done it, I have respect for all my opponents but always go out to do a job.”
Big Manchester City fan Flanagan, says that the best day of his life other than his child being born, was when the Blues won the Premier League last year and the season ticket holder says although they wont give up, it’s looking like this years league is going to the red half of the city and if so Flanagan wants to cheer himself up by bringing his own titles back to Manchester.
“Well I wont be going to the West Ham game at home because that’s on the Saturday (April 27) of the fight, but I’ll watch it on telly and then some of me mates and family who are going to the match will then get over to Sheffield for the fight so it should be a good day.
“Yeah I’m a big city fan, I train at the ground on the running track in the week and go to the games if I’m not fighting, so I’m never far away and the grounds only two minutes from my house. The league is looking like it wont be ours this year but we will come back stronger next year.”
Asked if it would be a dream of his to fight at the Emirates Stadium one day, Flanagan laughs; “Haha yeah that would good, but one fight at a time. But I love boxing and I love City so to fight there in front of all the fans like Ricky Hatton did would be a dream yeah, and one day I hope to make it come true, we’ll see what happens, but for now I’m fully focused on April 27 and Sheffield.
Follow us on Twitter: @britishboxers