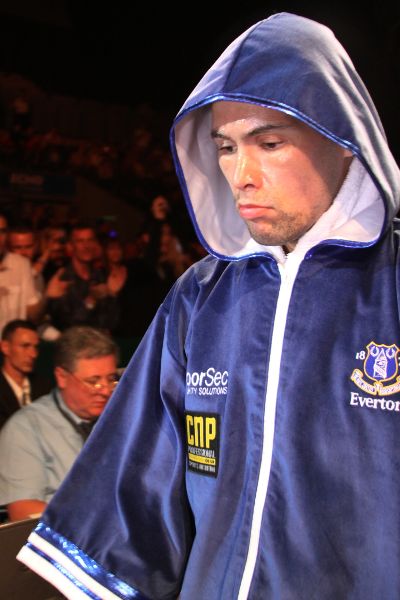 Tony Bellew could only manage a draw in his WBC Silver belt championship fight with Isaac Chilemba on Saturday night at the Echo Arena inhis home city of Liverpool.

The fight was not to live up to the pre hype that these two world ranked light-heavyweights had promised before hand. The contest never really got going, Bellew (19-1-1, 12KOs) was content to box at a pace behind his jab and was never able to get to the awkward and tentative Chilemba long enough to cause any damage and although he had built up an early lead, Chilemba was able to come back in the second half, after a few rollicking’s from his cornerman Buddy McGirt.

Evertonian Bellew, 30, entered the arena to the bellowing sound of his beloved teams adopted anthem Z Cars and the atmosphere in the Echo was electric. The crowd had just been given an early taster for the main event, when local man Derry Mathews locked horns again with Mancunian Anthony Crolla to produce 12 rounds of exciting action that ended in a draw.

This draw never had the effect that Mathews-Crolla had on the crowd and the fight became something of a stale mate. Chilemba 20-1-2 (9) was very hard to hit clean and he did have his successes in terms of punches landed, but neither ever hurt the other. At the final bell it was thought by British Boxers that Bellew had taken the fight by a round, although the result completely split opinion, with many seeing Chilemba as the victor.

The judges scoring reflected the fight with scores 116-112 to Chilemba, 116-115 to Bellew and a final 114-114 even. In the end a draw was a fare result in a fight easily forgotten   A rematch is expected although Bellew is currently scheduled to defend his Lonsdale belt in May against old foe Bob Ajisafe the current English champion, who him a tough battle in 2010, in that fight Ajisafe knocked Bellew down in the fourth, but he got up and went on to win a unanimous decision.

The Derry Mathews – Anthony Crolla rematch will in stark contrast to the main event live in the memory for a long while yet. A draw was the same result as the main event but that is where the similarity’s end. This eagerly-anticipated rematch lived up to the hype and both put it all on the line in front of a frenzied crowd, who were deeply engrossed in the 12 to and throw rounds that pursued. The fight had the vacant Commonwealth lightweight title on the line but for these two proud warriors there was far much more on the line in terms of fighting pride.

Mathews had stopped Crolla in that fight of the year encounter in April 2012, a 5th round victory for Mathews saw him take the British lightweight title off Crolla that night in Oldham. Crolla was putting his career on the line at championship level, another loss to Derry would have left him in a precarious position.

Mathews started the fight well as Crolla approached this rematch tactically different than he had the first fight and different to his usual style of late. The Manchester man was on his toes and looking to create angles, while staying out of range of Mathews’ power. Mathews steadily got into the fight and stalked Crolla always looking to gain centre ring and engage his man. Mathews had success mid point and seemed to be building a steady lead, only for Crolla to get a second wind and finish the fight strong to take the last few rounds.

The judges were unable to split them and fans opinion was also been divided Both men thought they had done enough but the judges scores of 115-113 Mathews, (32-8-2, 17KOs) the same score for Crolla (25-4-1, 9KOs) while the third judge had it even 115-115 a draw.  A third fight between the pair should be inevitable, but it’s a fight that should be topping a big bill and if these two honest hardened pros are to put it all on the line again they deserve to be paid double whatever is on the table for a rubber match.

Liverpool’s unbeaten Rocky ‘From Stocky’ Fielding stopped Sheffield’s Wayne Reed to retain his English super-middleweight belt and looked good doing it, showing an improvement in power and conviction, when he had Reed hurt, he was purposeful in looking for the finish. Southpaw Reed came to take the Scouser’s title and was looking to land his own big shots. But Rocky soon got into character and countered Reed with his own stunning shots. Reed (10-6, 5KOs) was dropped at the end of the 5th after taking a big uppercut and then Rocky (13-0, 7KOs) )ended the fight in the next with a body-shot to retain his belt and put himself in British title contention.

Another Local Liverpool favourite James “Jazza” Dickens claimed the vacant English super-bantamweight title over 10 tougher rounds than maybe expected, against a spirited Jon Fernandes, who climbed off the canvas in the first round to comeback well to take Dickens the distance.