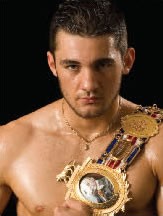 Bernard Hopkins boldly proclaimed this past weekend how he has, “a history of ruining young fighters.” The amazing 48-year-old certainly gave the previously unbeaten, much younger Tavoris Cloud a boxing lesson in New York, but it remains to be seen if “The Executioner” has indeed ruined Cloud.
Next up for Hopkins might be a fight with another currently young and unbeaten light-heavyweight title holder: Nathan Cleverly of Wales. According to Dan Rafael of ESPN.com, this oft-talked of fight could happen later this year, with B-Hop interested in travelling to engage in a unification fight.
Cleverly has other business to see to first (to keep his WBO title) but he and his promoter Frank Warren have spoken of a desire to take this big fight.
The question is: can “Clev” do what other young, talented and unbeaten fighters have failed to do and solve the Hopkins puzzle? Hopkins, as he showed again against Cloud, has a knack of making, forcing, or intimidating, the other guy into fighting HIS fight. Then, when this happens, Hopkins takes his time, gets into his groove and takes the other guy to school. Just lately, only Chad Dawson, who fought a more aggressive fight than he’s accustomed, refused to fall into Hopkins’  trap. Can Cleverly also beat up, dominate and out-work Hopkins?
Fellow Welshman Joe Calzaghe had a tough time with Hopkins back in April of 2008, but Joe’s fast hands and his relentless pressure finally got the job done; albeit via controversial split decision. It may be up to leverly to now do what his countryman did and avoid falling victim to Hopkins’ mind games, cleverness and boxing brilliance. If he takes the fight, this summer or beyond, Cleverly will be taking a big risk. Still, if he can beat the ageing Philly master – by stoppage especially – Cleverly will have won the biggest, most statement-making win of his career.
Cleverly would likely be able to dine out on such a win for many years to come! But can he do it? It appears as though Hopkins is ready to roll the dice one more time.