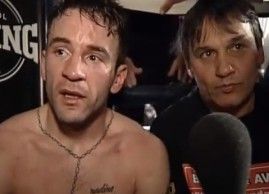 Former European champion Lee Haskins made a winning return to his hometown of Bristol to become the new British Bantamweight champion. Haskins stopped Martin Ward in the fifth round to extend his record to 27 wins and 3 losses and take the Lonsdale belt. The bout at City Academy was the first championship match to be staged in Bristol since 1998, and Haskins made it count in front of his home fans on Saturday night to become a two-weight British champion.

Haskins took charge of the fight from the first bell, taking the centre of the ring and flicking his jab at every opportunity with Ward content to wait for openings and tie-up. Towards the end of the round both men became more prolific with their output, with Haskins landing a big right hand, followed by a left which pushed Ward up against the ropes.

The second round followed on from where the first left off, with a Haskins right hook sending Ward against the ropes, although he was able to recover before he fell to the canvas. Ward did hit the floor later in the round, but the referee ruled it a slip with the Newcastle fighter insisting he had been pushed. The pace became fast and furious for the next two rounds, as both men threw plenty of hard shots without being able to make a telling breakthrough.

That breakthrough came in the fifth round. After a scrappy opening Haskins backed Ward up against the ropes and unloaded an unanswered flurry that had Ward turning his back, and clearly in big trouble. With Haskins landing some heavy punches and Ward seemingly unable to throw back, the referee stepped in and awarded the win to the former EBU titlist.

Following the fight Haskins paid tribute to the atmosphere generated by his home crowd saying ‘it feels like I’m fighting for a WBC world title’.  Fighting for that world title may not be an impossibility for Haskins in the future. Jamie McDonnell (who Haskins beat in 2008) has brought an IBF world title fight to Doncaster, and Haskins’ manager Chris Sanigar will be sure to want to follow that lead.

Martin Ward, whose record is now 16-2, said before the fight that he wanted to win the Lonsdale belt for his trainer Neil Fannan, was unable to take the title but at 25 years old has time on his side. Lee Haskins, however, made it clear post-fight that he wants to use his British title success as a springboard for a rematch with Stephane Jamoye and the opportunity to regain his European title.