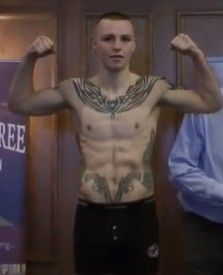 Unbeaten Sheffield prospect Adam Etches and his opponent  Andrei Abramenka weighed in ahead of their IBF Youth middleweight title fight, which takes place on Saturday night at the Ponds Forge Arena in Etches home city.

Etches believes his fan base is growing so rapidly, it won’t be long until he’s topping the bill on big arena shows. Saturdays fight against Abramenka will be his toughest fight to date and will be for his first professional title.

Tickets for the show were in such hot demand that all 2,000 seats at Ponds Forge were sold with more than a month to go. And Etches believes the next step is a headline slot at Sheffield’s 12,000 capacity Motorpoint Arena.

“I’d like to think after a couple more of these type of shows, my fan base will have grown so much the Arena is the only place I can box at,” Etches said.

“It’s all about building upwards, everyone enjoying it and me doing a good job in the ring. Afterwards everything will fall into place.

“That said, filling Ponds Forge is something in itself. I don’t think there’s many boxers at my sort of level who’d be able to do that.”

Abramenka represents a significant step up in class for the Yorkshireman. “I’ve got to be on my game because Abramenka’s young, he’s hungry and he’s only lost twice on points after 20-odd fights. added Etches.

“I’ve watched clips of him on Youtube and I saw him when he boxed Matthew Hatton, but I tend not to look too much into it because it’ll be a different Abramenka when he fights me.