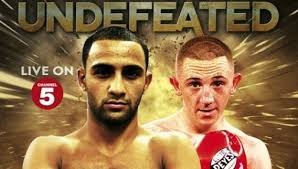 Video: Dickens fails to show up at Press Conference for Galahad fight

Two of British boxing’s brightest prospects Kid Galahad and Jazza Dickins will put their unbeaten records on the line on Saturday night when they meet each other in a clash that promises to be as good as anticipated. The clash will take place at the Magna Centre in Rotherham and the vacant British super-bantamweight title is on the line.

Both boxers have been nominated for young British boxer of the year award and the winner of this one will be hot property. Both have sparred each other in the past and know each other fairly well

Dickens failed to turn up for the official press conference on Thursday (video above courtesy of FightHub) and had to be represented by his manager Steve Wood, who said that his fighter had been delayed because his car had broken down on the yorkshire Moors, but promised that he would be there on Saturday night. Galahad’s team didn’t believe Wood’s explination and suggested because Dickens is struggling with the weight, he decided to stay home.

Galahad, aged 23, has a record of 14-0, 7KOs. He won the WBC International title when he beat former world title challenger Jason Booth last year and then defended the belt against Josh Wale.

Dickens a year younger than his rival has amassed a record of 16-0, 5KOs. He dropped Jon Fernandes en route to claiming the English super-bantamweight belt in March and then added the British Masters Silver crown to his collection at the end of May with a straightforward points win over Dai Davies.

This is a good trade fight and respect to both boxers and their camps for getting it on.