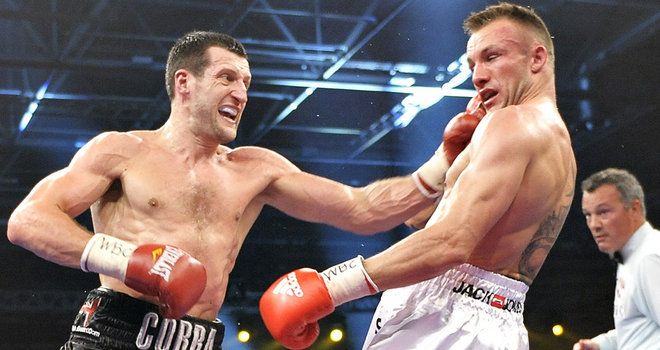 Carl Froch put on a determined dogged display and a tactical class to defeat old rival Mikkel Kessler in their rematch at the O2 Arena in London on Saturday night. Froch had to dig in deep at times to get the upper-hand on a tough Kessler and the fight was as intense and action packed as the first one. IBF champion Froch is now the WBA champion after taking Kessler’s belt to unify the titles. After the fight Froch called out America Andre Ward, the divisions No1 fighter and the only other man to defeat him. read more..

Our round by round report is below.

Both fighters take centre ring and trade off big shots, two immovable teak tough objects seeking dominence over the other, something has to give! Both get right down to work and are trying to get their respected jabs off. Froch is the bit quicker and he is landing well with his over hand right. Kessler lands a good shot of his own, but Froch takes the round, it’s a good start to what promised to be a cracking fight. 10-9 Froch

Froch punches are stunning Kessler and the Brit is starting to up the pace, he is throwing punches in three’s and fours and taking the Dane off balance. Froch switches the left hook to the body good, Kessler tucks in his elbow, he felt that shot! Back behind the jab, Froch sends in another big right, he is on top here Froch and looking mean and determined. 10-9 Froch

Froch’s tactics are spot on, his jab is dictating the action and Kessler is walking onto the sharp shots from Froch. Kessler is trying to get in range, but Froch is always one step away, the Nottingham man is looking dangerous and super sharp, Kessler is wary and cannot get into the fight atall. 10-9 Froch

Another right catches Kessler from behind a stiff jab from Froch, Kessler isnt throwing enough punches but he is trying to get his own jab off. Froch though continues to beat him to the punch while always out of range. Kessler begins now to change his tactics, he’s now drawing in Froch and lands his own telling shots, a good left hook to the body gets Froch’s attention and he smiles at Kessler in acknowledgement. It’s a better round for Kessler but Froch’s earlier work just takes it. 10-9 Froch

Kessler starts this round has he finished the last, his tactical change is noticeable and he is getting through now and timing his shots, his movement is better. This fight is hotting up and every bit as good as expected. Kessler troubledFroch in this round and a big left hook sealed the round in Kessler’s favour. 10-9 Kessler.

A low blow from Kessler hurts Froch, the crowd boos, but the fight resumes immediately. Kessler pounces and lands two good shots. This is an intense edge of the seat battle, and at the half way point both are looking strong, this is anyone’s fight and at this stage could go either way. Kessler is pushing forward and Froch as slowed after a fast start, Kessler lands again well to win the round. 10-9 Kessler

Froch got himself together again at the start of this session and started to work well again behind the jab, he takes grip of the tempo again and peppers Kessler with his jab. The last minute of the round and both open up, big bombs are landing from either but it’s Froch’s shots that look the harder and he hurts Kessler. Both are winging away as the round ends, Froch is back in control. 10-9 Froch.

Best round of the fight for Froch here, Kessler is taking some hurtfull punches, his nose is bloody. A right hand from Froch rocks Kesslers head back and again Froch is taking over. Big Big round for the Cobra. 10-9 Froch

Froch put a lot into the last round and looks to have got his second wind after dropping his pace. Both are weighing up the other looking to pick the shots now. Another good one two from Froch. But Kessler has took advantage of the pace and raises his game, its a close round this one. 10-10 Even.

It’s back to a battle of the jabs now, each are trying all their know how, two quality world champions trying to outwit each other, it is fascinating, both are tired and feeling the pain of battle. It is now a case of who wants it the most in the championship rounds. 10-9 Froch

Froch is cocking his right hand, he lands it! Kessler comes back with a nice left hook. Froch lands another slashing right! There trading again, taking, receiving. Froch is Hurt! Big left hook from Kessler! After landing a combination he is countered by Kessler and is visibly shaken, Kessler pounces in. But Froch recovers, his eyes look ok and he fires back. Froch is cut over the left eye, they trade off non stop shots the bell goes, what a round again. 10-9 Kessler.

Last round of a great fight, these warriors have given it all! – It’s toe both are t-ing off, it’s an action packed last round. Kessler is Rocked, he is taking shots without reply. Froch lands below the belt. The ref looks like he is about to step in but Kessler some how fires back, this is on a knife edge, Froch is looking for the stoppage, how is Kessler taking these shots! The bell goes and ends a fight that will live for the ages, as good as predicted! 10-9 Froch.

After the fight Froch said: “It feels really good. The only thing that feels bad is that I have had to beat such a real gentleman, a real warrior and real nice man.

“He did hurt me a couple of times; I think everybody saw that. But I hurt him a little bit more and I thought I deserved the win. I thought it was unanimously my fight.

“I was close to getting the stoppage towards the end but, when I went in for the finish, what did he do? He fought back with a couple of big, hard shots. Big respect to him.”