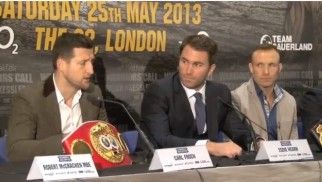 Froch and Kessler Meet Again May 25 in London

British BoxersFebruary 4, 2013
ArticlesFight ReviewsiFilmLondonLATEST BOXING NEWSPress Conference Videosvideo0 Comments4 min read
Carl Froch came face-to-face with Mikkel Kessler today in London to confirm the duo’s rematch which will take place at the O2 Arena, May 25.
Froch, 35, has promised to produce a different ending to this fight after being beaten by Kessler in the Danish mans back yard back in April 2010. The return has been eagerly-anticipated and has taken three years to make with both taking different routes and come into this one has joint world title holders.
In there last fight, Kessler took Froch’s WBC world title and as since gone on to claim the WBA belt, which he holds now and will be putting on the line against IBF champion Froch in a unification fight that promises to be a fantastic fight, if the last one was anything to go by.
This is the fight Froch craved to seal his legacy and erase the ghost of defeat, that he says still keeps him awake at night and although The Cobra has great respect for his adversary, he believes he have his revenge.
“It’s difficult to put into words, how much this fight means to me.” said Froch at Monday’s Presser.
“I’ve fought nine or ten title fights back to back, but Mikkel Kessler has everything.
“I’ve got so much respect for this man but he inflicted my first professional defeat. It’s a bitter pill to swallow – I still think about that loss when my head hits the pillow.
“He took away everything that meant everything to me at the time. My professional career, as far as I was concerned, was in tatters. I avenged that defeat by winning my world title back in my next fight and then boxed in the Super Six.
“If you follow boxing, you’ll know I’ve had some epic battles with top level fighters, but you’ll know I’ve still not had the chance to avenge the defeat against Kessler, so this for me is a chance to set the record straight.
“Mikkel is an honourable man and is coming to the UK to give me a chance to avenge the defeat. Myself and Rob McCracken are going to be working meticulously in the gym to make sure that I put right the wrong that happened in Herning. My blood is boiling and I’m ready to go.”
“This time the fight will have a different ending, and it’s one that the Dane is not going to like.” added a confident Froch. (30-2, 22KOs)
After years out of the limelight and not getting the recognition he deserved by the British sporting fraternity, in the early part of his career, Froch is now one of the biggest names in game, and is held up by his fellow professionals as a fighters fighter while hero worshipped by the UK fans and beyond. After some dramatic fights and the fact he has faced world class opposition over and over, it is no wonder his efforts are now recognised and reaping the rewards the Nottingham champion deserves. So much so this fight will be shown live on Sky Box Office and Froch believes it will give him the perfect platform to join the prestigious list of British boxing greats.
“Fighting on Sky puts me up there with the modern British stars like Lennox Lewis, Prince Naseem Hamed, Ricky Hatton and David Haye and viewers are going to get the full ruthless Carl Froch experience.”
Kessler, 33, though is super confident he can prove that the last fight was no fluke and he is confident that he has Froch’s number and is promising to beat him again on his home turf this time. insisting he has no fears about facing Froch in front of a partisan British crowd.
“This will be an incredible fight.” said Kessler. (46-2, 35KOs)
“Our first meeting was a classic, the best fight ever on Danish soil. I promised Carl a rematch and here I am, ready to come to England and beat him again.
“I love travelling to the UK, I’ve always been treated very well over there. My mother is English, so there is some British blood inside me. Add to that my Danish fighting spirit, my power and my skills and you know that Froch will be in trouble. The Viking Warrior is ready for war and the Cobra is going down.”
press conference video by iFilmLondon