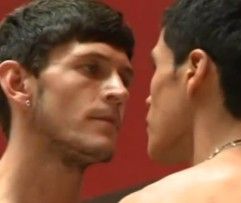 Jamie McDonnell on Weight and Ready for the Big One

Doncaster’s Jamie McDonnell made the weight comfortably for his big world title showdown against unbeaten Mexican Julio Ceja on Saturday night, when he hopes to land the vacant IBF title bantamweight title at his home town football clubs Keepmoat Stadium.

“It doesn’t get much bigger than this – I’m in my own town in the biggest venue available. I’m living the dream in that sense. I want it so badly. It means everything now.” – Jamie McDonnell

McDonnell came in on the scales at 8st 5lb 12oz at the the Frenchgate Shopping Centre and looked in great shape confident and ready for the biggest fight of his 8 year career. Julio Ceja tipped the scales at 8st 3lb 12oz, just 2lbs below the home fighter and the fight is officially on! read more

Commonwealth bantamweight champion Stuart Hall will takes on American Sergio Perales for the vacant IBF inter-continental bantamweight title and at the weigh-in the Darlington fighter had to strip down naked after coming in initially 2oz over the limit.

Perales is ranked at No 5 by the IBF and this is a great opportunity for the Darlington man to make a splash on the international stage and set himself up for a potential world title possibly against old foe McDonnell in a rematch, should he beat Ceja.

Stuart Hall, who will compete in the chief support fight on the night – was forced to drop his underwear to come in under the bantamweight limit. After initially weighing in 2oz over, the Darlington fighter quickly removed his boxer shorts got back on the scales and then registered 8st 5lb 12oz. – His opponent on the other hand was even more over the weight limit at 8st 7lb 4oz, but he was given the specified time to drop the additional weight and came back to make it and the fight was declared on. read more

Other weights from the undercard participants: