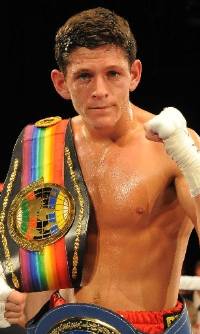 Jamie McDonnell will fight for the vacant IBF world bantamweight title against unbeaten Mexican Julio Cejaat at the Keepmoat Stadium, the home of his local football team, Doncaster Rovers on May 11.

British, European and Commonwealth champion McDonnell deserves his chance after dominating at domestic and European level for the past five years. His win over Stephane Jamoye in 2011 really showed that the Doncaster boy had really seasoned into a complete boxer. He can shift through the gears with ease over the title distance and is as happy using his skills to outwit a foe as he is to a inside rumble.
The fight is being held at his teams ground, a stones throw from where he grew up and with over 7000 tickets already gone on sale with a possible capacity of 9000 expected, it will be some night.
The title became available when Leo Santa Cruz relinquished last month and the bout will be McDonnell’s first since he stopped Darwin Zamora as chief support to Kell Brook in October.
McDonnell (right) said at the press conference: “I’m over the moon to get his fight at the Keepmoat and it means everything to have this fight in Doncaster.
“I’m going to make the dream come true on May 11, win the fight and win the world title.
“It’s spurred me on 200 per cent and I want the people of Doncaster to get behind me and sell the Keepmoat out.”
Promoter Dennis Hobson who worked hard to secure McDonnell’s dream of fighting for the world title and as pulled off a great coup getting the fight not only in his home town of Doncaster, but at the nostalgic setting of the towns football ground.
“I am delighted to be bringing the world title fight to the Keepmoat Stadium. Both Jamie and I have long been determined for his world title fight to take place at his home stadium.” Hobson said.
“Ceja’s camp really wanted the fight to be staged in Mexico and we had to work really hard to bring this fight to South Yorkshire.
“The facilities at the Keepmoat Stadium are fantastic and Jamie is exceptionally proud to be showcasing Doncaster and the stadium to the world.
“We would love Jamie to be crowned the first boxing world champion from Doncaster in his home town on 11 May.”
McDonnell has a record of 20-2-1 while Ceja, 21, has an unblemished 24-fight record but has never fought outside Mexico before.