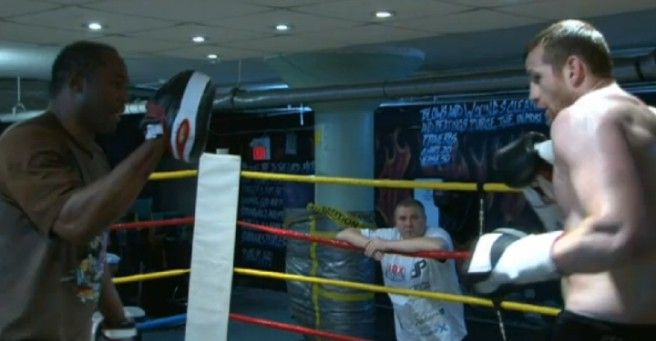 Lewis encourages Price to get Mean and Nasty

Lennox Lewis believes nice guy David Price can reverse his defeat to Tony Thompson and go on to become a world champion, but insists that the British heavyweight champion must get more ‘Mean and Nasty’ when he steps through the ropes in the future.

The Liverpool heavyweight was knocked out by Thompson in the second round of an international contest in February, it was Price’s first defeat as a professional 16 contests.

Price, 29, has spent three weeks with British boxing legend Lewis at a training camp in Toronto Canada, as he prepares for the July 6 rematch with the American former two time world title challenger Thompson.

“David is a good guy, maybe too much of a good guy. I’m going to get some nastiness in him,” Lewis told the BBC.

“The physical aspect, the determination, the desire – he’s got all that. I’m going to get him mean.

“He needs to be a little bit meaner out there because these guys are trying to take his head off. They’re trying to hurt him and he can’t be letting that happen. He has to fight back and be a little nasty.”

Former undisputed world heavyweight champion Lewis contacted Price via Twitter following his second-round defeat by Thompson earlier this year. The 2008 Olympic bronze medallist said receiving the support of one of his idols was a huge lift after the most disappointing night of his career to date.

“It still feels a bit surreal at times that we’re hanging out with Lennox Lewis – he was my boxing hero.” said Price.

“After I lost my last fight, I received a message of support from Lennox on Twitter. He left me his phone number and he offered to help me out. It was a no-brainer to accept.

“He wouldn’t give up his time if he didn’t believe I can go on to good things. He knows what it takes and he obviously thinks I’ve got what it takes, so that’s been a massive encouragement.”

watch the video of Price training with Lewis here