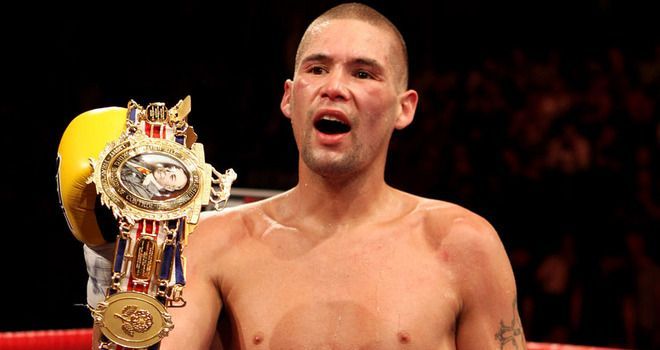 Tony Bellew watched Adonis Stevenson shock boxing by KO’ing Chad Dawson in just 76 seconds of the first round to claim the WBC light-heavyweight title and the Liverpool fighter immediately insisted he would relish a title shot against the big-hitting Canadian next.

Southpaw banger Stevenson dropped Dawson on his back with a big left cross that crashed off the champions head. Dawson groggily climbed to his feet to just beat the count, but unable to regain his senses the referee called the fight off in Montreal.

Bellew (pictured above with his British title belt) is the WBC’s number one contender after finally defeating Isaac Chilemba in the final eliminator and is now next in line to tackle the dangerous Stevenson.

Stevenson has only had 22 fights despite being aged 35 and after chasing a super middleweight fight with Carl Froch he instead decided to move up to light-heavyweight and it paid off.

Although the new champion looks like a fearsome banger and a difficult proposition for Bellew to face, the scouser insists he is relishing a fight with Stevenson, and is happy that the Canadian beat Dawson because he is the one he would have chose to fight for the title anyway and is confident he can bring it back to Britain.

“He’s the one I’d have preferred to have faced. He’s shocked boxing and it’s great what he has done, but it’s not going to last long, I’m telling you now,” Bellew told Sky Sports.

“Adonis Stevenson is wild and he gives you opportunities. So I don’t think he’s going to be a long-standing champion – especially if I’ve got anything to do with it.

“I said on Ringside on Thursday I’ll go anywhere, I’ll go literally to his back yard. It doesn’t matter where this fight happens, his back yard, England, Liverpool, it’s going to be a fight to watch and I’m so excited by the prospect of facing Adonis Stevenson.”