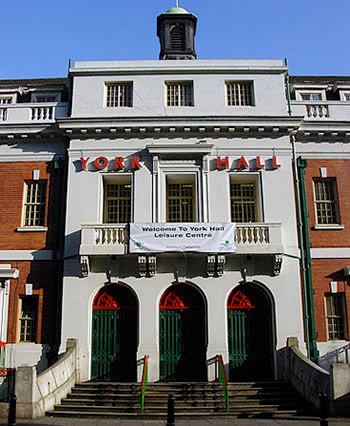 Our top professional boxers have competed in some of the most lavish and traditionally iconic venues at home and around the world, having some of our greatest ring successes.

Here we run down four of the best venues, two in the UK and two in the USA and list some of the fights that we’d wished we’d been there to see.

Madison Square Gardens, as it stands today, opened in 1968, and is the fourth New York arena to be built in New York. The current arena is one of the busiest in the world, and has seen fights from the likes of Muhammad Ali, Sugar Ray Robinson and Rocky Marciano.

1997 saw Naseem Hamed, the featherweight from Sheffield, who had become world champion in 1995 come up against Kevin Kelly. This was Hamed’s debut in America and he hit the canvas first. Both fighters went down in the second and fourth rounds, but Hamed triumphed in the fourth, winning on a knock out. Scarbouroughs Paul Ingle fought on the same Madison Square Gardens bill as Lennox Lewis in April 2000. Lewis successfully defended his world heavyweight title against Michael Grant (KO2) and Ingle stopped Jones in the first defence of his featherweight world title against ‘Poison’ Junior Jones.

Lewis the previous year had fought a controversial draw against Evander Holyfield at the Garden on March 13, 1999, Lewis that night was attempting to become the first British undisputed heavyweight champion of the century, but was denied in what was is considered one of the worst decisions in heavyweight boxing history.

Lewis would win the rematch eight months later at the Thomas & Mack Center in Las Vegas and return to the UK as the country’s first undisputed heavyweight champion since Bob Fitzsimmons held the title in 1899.

This year unbeaten Manchester heavyweight Tyson Fury took on former cruiserweight world champion turned heavyweight Steve Cunningham. Fury knocked out the American in round 7 after getting off the floor himself in round 2.

Were you at any of the fights? Do you stay up late that night to watch them on TV? Please share your experiences/views below in the comment box. or tweet us @britishboxers

York Hall is one of Britain’s best loved boxing venues, was opened in 1929 initially as a public baths and now as the home of British boxing. The Hall has played stage to a multitude of boxing talent, from the novice pros coming through to the big names. British Boxing stars including world champions Lennox Lewis, Joe Calzaghe, Michael Watson, Nigel Benn and Chris Eubank have all cracked the boards and played there part in it’s history. David Haye made his professional debut at the Hall and current super-middleweight king Carl ‘The Cobra’ Froch had his first four fights professional at the Hall, before going onto now fill out arenas.

The Hall has been heralded by many observers as Britain’s greatest fight venue. In 2005, after staving off the very real threat of closure, the hall underwent a massive refurbishment. The Hall is small with only a 1200 intimate capacity and fight nights in the Hall regularly reach over 30 degrees and the balcony allows fans to be in a unique position to view the fight and the atmosphere is usually as hot as the temperature inside this iconic Capital venue.

How good would it have been to see the young Lennox Lewis grace the Hall’s canvas in January 1990 in his 7th fight against Liverpool’s Noel Quarless. The future undisputed heavyweight champion of the world and now British boxing legend stopped Quarless in the second round, three years later he was world champion. Were you at any of the fights? Do you remember? Please share your experiences/views below in the comment box. or tweet us @britishboxers

Caesars Palace is located in Atlantic City and is a luxury hotel and casino. The Caesars Palace company itself has a fascinating history, with rumours of mafia dealing in the sixties and numerous appearances in film and popular culture. For those that can’t trek to Atlantic City or Las Vegas to experience the thrill of the casino, there’s Jackpot Capital casino offering true online casino style games.

Caesars Palace hosted Lloyd Honeyghan’s welterweight world title challenge against pound-for-pound No1 of the time Don Curry in 1986. This fight was expected to be an easy win for Curry, who was looking at a long-running career in boxing, making up for the recent but in the end temporary retirement of Sugar Ray Leonard. Curry hadn’t bet on the skill of the British European and Commonwealth Champion, whose lack of refinement meant Curry thought he was a shoe in to win. However, Honeyghan came out swinging, forcing Curry to retire at the end of round six. This fight is reputed to be one of the greatest boxing upsets ever. We just wish we’d been there to see it. Were you at the fight? Did you stay up late that night to watch Honeyghan shock the world? Please share your experiences below in the comment box. or tweet us @britishboxers

The Kensington building in west London, which was opened by Queen Victoria in 1871 and is dedicated to her husband, was once a renowned venue for the boxing, hosting fighters including Randolph Turpin, Howard Winstone, Sir Henry Cooper, John Conteh, Frank Bruno, Nigel Benn, Chris Eubank, Lennox Lewis, Prince Naseem Hamed and Ricky Hatton.

Despite initial opposition to boxing, the first fight to take place at the venue was in 1918 between The British Empire and The American Services as soldiers and sailors battled each other. A few years later in 1921, Edward VIII Prince of Wales was ringside to witness Welsh great Jimmy Wilde face Pete Harman.

Former world light-heavyweight world champion Georges Carpentier and Australian champion George Cook in 1922 brought in a record £14,000 which at the time was one of the largest Box Office takings. When bouts with prize money were allowed it attracted many foreign greats, including Italian heavyweight and former world champion Primo Carnera who beat Reggie Meen at the Hall in 1930 via 2nd round knockout.

The most famous boxer of all time, Muhammad Ali, didn’t fight a competitive fight at the Hall but he appeared in 2 exhibition bouts in 1971 and 1979. An opponent of Ali and a British treasure, Sir Henry Cooper, graced the Hall on 4 occasions between 1955 and 1965.

Two of Britain’s most loved heavyweights and former world champions both made their debuts at the Hall, Lennox Lewis and Frank Bruno. Lewis fought at the Hall 7 times, the highlights were knocking out Glenn McCrory in round 2 to defend his British and European title and then to win the British title outright whilst also defending the Commonwealth title with a win over Derek Williams. After making his debut there in 1982, Frank Bruno fought at the Hall 15 times and won all of those fights by knockout.

The Hall has been a happy hunting ground for Welsh fighter with world featherweight champion Howard Winestone appeared at the hall in 1967, defeating America’s Richard Sue on points. In 1981 it was host to Colin Jones’ British and Commonwealth title welterweight rematch with Kirkland Laing, Jones won via 9th round knockout. Joe Calzaghe was the last Welshman to fight at the venue in 1995 when he defeated Stephen Wilson in 8 rounds to become British champion.

The last world championship to be contested at the Royal Albert Hall was between Mexican legend Marco Antonio Barrera and Paul Lloyd in 1999. Also on the show that night was a British heavyweight title fight between Julius Francis and Danny Williams and a young Ricky Hatton who in his 12th pro fight knocked-out Brian Coleman in the second round.

In recent years however, residents who were concerned about noise and “anti-social elements” won a High Court order to end licensing approval for boxing at the hall and for many years boxing ceased to be an event. But the Court of Appeal subsequently overturned the decision in 2011 and the first boxing event that took place there was the Combined Services of the UK take on the US team and a poignant re-start for boxing at the Hall resembling the very first event way back in 1918.