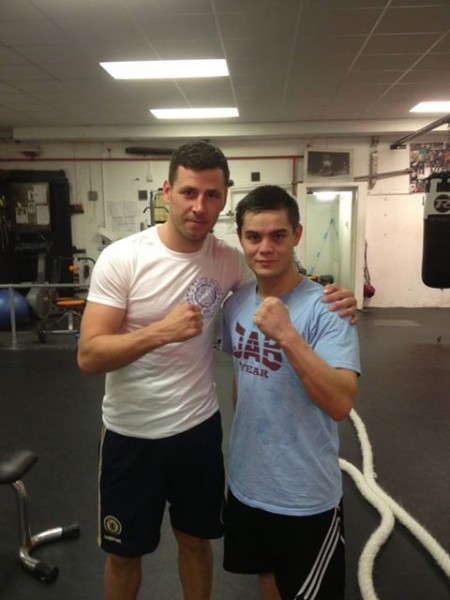 David Leo Making The Transition From Amateur To Pro

David Leo was born in Barking, Essex. He lived there for a year before moving to Broxbourne, Hertfordshire, where he still resides. He started off as a young cub, who was new to boxing but had an aim to make some noise as an amateur. Now he’s a mature lion, and he’s ravenous, determined to make a name for himself as a pro!

David ‘Lionheart’ Leo is making the transition from amateur to professional boxing towards the end of 2013. It’s a whole different ball game as they say. Two completely different sports. Leo, 30, will have to get used to not wearing a headguard, wearing lighter gloves and approaching each fight with a different strategy and mentality. He is under no illusion as to how tough the switch from amateur to pro will be. Under the tutelage of new trainer, Peter Sims, they will be planning a ferocious attack on the pro scene! You need such strength and courage to succeed in this game, and Leo believes he has the qualities to reign supreme!

I’ve seen many clips of Leo’s amateur bouts via YouTube, and I liked his aggressive style from the off. I also could see improvements with each bout too. As soon as I heard he was switching from amateur to pro, I wanted to get to know a bit more about him and how he got into boxing.

I got in contact with him and he kindly took time out to answer my questions.

How old were you when you first got into boxing?

I was 21, I wanted to do a martial art but I had a bad ankle from football, so that left me with my hands and boxing.

How old were you when you first put on a pair of boxing gloves?

Again, 21. Before then I had never done any kind of boxing!

Which amateur bouts that you’ve competed in stand out to you?

Erm… Tough question. I’ll have to name a few for their different reasons. My first encounter with Charlie Rice (now professional), was one of my hardest fights because he hit so hard!!! I had 3 bouts with Islington’s Carlos Moreno which were 3 great wars. And then my favourite will have to be avenging my loss to England boxer Jimmy Cooper. 18 months after losing to him I had a rematch and KO’d him in the first round. My first fight after my Coach Ron Walton past away, so that was dedicated to him.

What did you achieve as an amateur?

Reaching an ABA quarter-final at lightweight at 28, then at featherweight the year after when I was 29. I think I was 28 when I was made captain of the home counties. I’ve been captain of Cheshunt ABC for about 4 years too.

Have you trained at Monster gym throughout your amateur career?

No, I was at Cheshunt ABC for about 9 years and trained there. I sometimes went to Monster gym to spar local professionals such as Ashley Sexton and Charlie Hoy. Now I’m at Sims gym in Hainault and train under Peter Sims.

What do you feel will be the biggest difference from amateur to pro?

Sounds a bit obvious but the lighter gloves and no head guard. It don’t bother me though but it will be strange.

What’s it been like training at Sims gym and being around pro boxers such as Darren Barker and Martin J Ward?

It’s an amazing experience training at Sims gym, being around top professional boxers. I had a spar with Martin J Ward as he was the closest to my weight and Peter had not seen me spar, so he had to try get some idea of what it was like when someone is throwing punches back at me. It was a great experience.

Can you describe how your training is different, now that you’re preparing for life as a pro boxer?

I now train in the mornings and then go to work after, whereas before it would be the other way round. Training is also harder, it’s more 1 on 1 with a trainer, so constant hard work. It also allows me to do more and learn more quickly.

Can you tell me where and when you’re making your pro debut and at what weight?

It’s looking like October 5 on the undercard of Liam Shinkwin, although there is a possibility of September 7 at York Hall. I’ll be fighting at featherweight with the plan to try super-bantamweight down the line.

How did the alias ‘Lionheart’ come about?

Well everyone says I battle every fight, never give up, a bit of a warrior. And I was watching Robin Hood and of course you have King Richard the Lionheart for being a warrior. Plus it works well seeing as my surname is Leo for the lion part and I have a lot of heart.

Have you any favourite fighters you enjoy watching, past and/or present?

When I did get into boxing at a late age it was when Ricky Hatton was on the up and beat Kostya Tszyu. And when I started to watch footage of past boxers, I became a fan of Tyson in his prime and George Foreman. Now I’m a massive fan of Mayweather, the guys skills have to go down as all time best. I like to follow Miguel Cotto as well.

Outside of boxing, what hobbies do you have?

I love sport generally. Football was my number one sport and still a favourite of mine, but boxing tops it now. But like I say I love sport, Tennis, Cricket, Rugby etc.

Finally, is there anyone that you’d like to thank that has helped you throughout your career?

Yeah actually, my first coach Ron Walton who passed away last year. He started me off when no one thought I’d be any good and instilled that warrior and battler influence in me. And also massive thanks to Peter Sims for taking me on and giving me this amazing experience so far.

I wish him all the best throughout his professional career!

For more information on when and where David Leo will be making his pro debut, get in touch with him via twitter @lionheartboxer