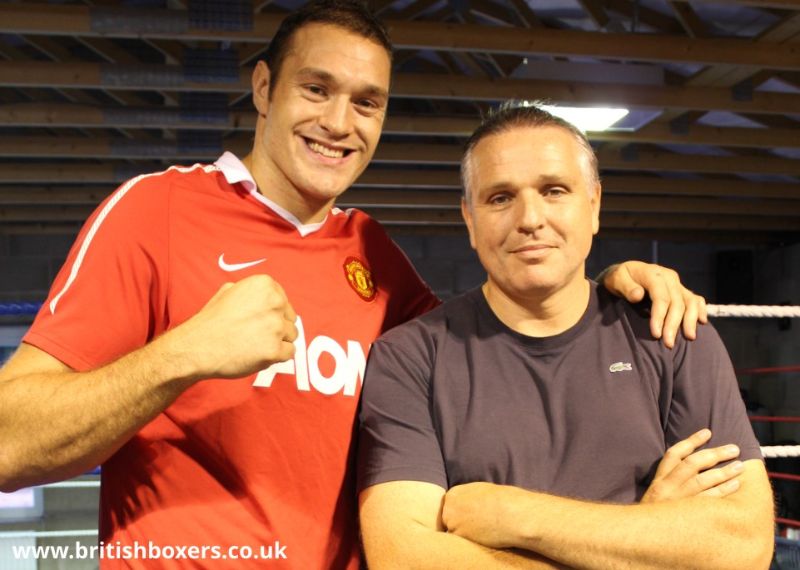 Peter Fury trainer and uncle of unbeaten world heavyweight contender Tyson Fury, talks exclusively to BritishBoxers regarding the recent rumours that a fight between his nephew and former world champion David Haye is close to being made.

Fury also reveals that if the fight can be agreed, it would take place around the 28th September this year in Manchester, with the Arena, or one of the two Manchester football stadium’s of United or City also a possibility, in what Fury calls ‘Tyson’s homecoming’. “We are currently in talks with David Haye and his people and things are going in the right direction, so hopefully that fight can happen and we can bring it back to Manchester.” Fury told us.

“We certainly want the fight and their telling us they want the fight, but it isn’t completed and there is still a fare way to go to get that fight agreed, but hopefully it happens. Tyson wants it and I want it.

“There is a lot to be agreed, who wants what, what’s the percentages, who gets the biggest share, venue, tv, and as yet nothing has been finalised. They think David Haye is the best thing since slice bread in England and I want Tyson to fight the best anyway.

Haye is rated as the best British heavyweight around by a streak, so we want David Haye!”

In our full interview with Peter Fury, the trainer also talks about Tyson’s last fight against Steve Cunningham and explains why the proposed European title fight with Kubrat Pulez fell through recently. Plus he talks about his son Hughie’s progress so far and his plans for his boy to have two fights a month every month on his way to the top.

Hi Peter, firstly you were unable to be in the corner with Tyson for his fight in April against Steve Cunningham in New York, I’m sure watching it at home on TV, your heart was in your mouth when he was floored in the 2nd round. What are your thoughts now about Tyson’s performance that night?

I think the main thing I was disappointed about in that fight was that he could have dealt with Cunningham far easier, but he didn’t and he nearly paid the price for it, you cant make silly mistakes like that. But a lot of it is due to his age as well, you know it was a big event, he wanted to please the crowd and everybody and he left his tactics in the gym and just walked in to have a war and got caught with a silly punch that he shouldn’t have. Believe me if he would have done as he was told, we would have seen an exceptional Tyson that night.

What has been the reaction to that fight in the trade?

You know what, good things come after bad things, and if they had seen what Tyson can really do that night, then we wouldn’t have the big fight offers that we have on the table now. When he fought Kevin Johnson, everybody turned their phone off, but now they’ve turned them on again now they think Tyson can be knocked-out, so it’s good in that respect. But let me tell you on the 28th September you will see an awesome Tyson and that is what people are failing to realise.

Why did the proposed European title fight with Kubrat Pulev fall through recently?

The fight isn’t on because we couldn’t even get a purse bid for the Pulev fight. Listen we wanted that fight, but it doesn’t matter to us, we are looking at bigger fights anyway. What people don’t realise is, if we had the Pulev fight it would have been a non starter for Tyson anyway because he would he would not have got paid for that fight, he’d have got buttons for it. But he would have won that fight and that would have made Tyson mandatory No1. – But then where does that put Tyson? Does he get the fight with Wladimir Klitschko? No he doesn’t! Because Wladimir Klitschko could make us wait two years, so it’s all bullshit being the No1. Tyson could have took Pulev won the fight and sat on his arse waiting for a pay day cause he’s mandatory. – Well I’m not interested in letting Tyson sit back and wait for a payday so we’ll take on who ever is best around and work our way up properly and when Vitali or Wladimir are ready to take it.

Please clear up the rumours and explain how far off a fight between Tyson and David Haye is to being made?

We are currently in talks with David Haye and his people and things are going in the right direction, so hopefully that fight can happen and we can bring it back to Manchester. We certainly want the fight and their telling us they want the fight, but it isn’t completed and there is still a fare way to go to get that fight agreed, but hopefully it happens.

Tyson wants it and I want it. There is a lot to be agreed, who wants what, what’s the percentages, who gets the biggest share, venue, tv, and as yet nothing as been finalised. They think David Haye is the best thing since slice bread in England and I want Tyson to fight the best anyway.

Haye is rated as the best British heavyweight around by a streak, so we want David Haye! But we have been in talks for lots of fights, remember we were in talks with Denis Boytsov and he agreed that fight and then that fell through because it wasn’t signed.

We have been in talks with plenty of other fighters and they’ve fell through. So unless it’s contracted, figures agreed, signed sealed and done then the fights just don’t happen, but we are very optimistic this fight can happen.

Before the Cunningham fight, David Haye didn’t want anything to do with Tyson when he was offering him out after beating Johnson. But since the fight with Cunningham he has come out of the woodwork and there’s a few other who want to fight so it’s good in that respect, but it puts them in a false sense of security, but it gives us lots of options now.

They (Haye’s camp) have been good up to now, but anything can go wrong. I know they asked us for certain percentages but it was ridiculous so we turned that down. So now we are just waiting to see what they want to do. But I can’t tell you much more than that because it isn’t agreed yet and that is the politics of boxing.

If the fight with Haye cannot be made for September what other opponents are you considering?

It will be a world top ten opponent, maybe someone in the top five or six. If we cant make the fight with Haye then we will look at hopefully getting Jonathan Banks, we cant get (Bermane) Stiverne, he’s already said he doesn’t want Tyson and he is holding out for his mandatory shot against Vitali Klitschko which you cant blame him, plus he is with Don King who is hell to deal with, so Stiverne is off the radar. And there is Tomasz Adamek who is also a possibility for us.

Your son Hughie has made a bright start to his professional career, he had his first fight in March and on Saturday has his 5th, plus you already have him lined up for another bout next week and then the week after that, your not holding him back?

He is going to have a minimum of 12 fights this year, bearing in mind he didn’t start until the end of March. Then by his 20th birthday he would have had 25-26 fights, more than Tyson had in 5 years as a pro. Hughie is 19 in September, so what we are aiming for is for him to fight in Manchester where were from, on the undercard to Tyson, who is looking for a big fight there on September 28th.

We hope then to step Hughie up to take on a top 10 British ranked heavyweight or an experience International opponent and by then he would have had 9 or 10 fights. But the immediate plans for Hughie are; he fights this Saturday and next Saturday, he then fights in Dundalk, Ireland on July 12th, which will then take him to 7 fights.

We have also been looking at Frenchman Gregory Tony for late July, we want to keep Hughie active and have him out boxing twice a month and this Tony would be a good step up and as you know he had Richard Towers in fits didn’t he.

Gregory Tony out of 24 fights, he’s only dropped 5 or 6, so he would be a decent step up for Hughie aswell at this stage. Hughie needs to be involved in these kind of fights, fights that while he is young and at this stage of his career are 50-50 fights for him and ones he will learn from to progress. But the ‘0’ on the record means nothing to me.

Please God he doesn’t lose, but if he did it would be no drama for us because he is a kid and cant be expected to beat everything in sight but were doing our best.

At 18 could he be on course to become the youngest heavyweight champion of all time?

Haha, well It’s something that you cant really work towards, because it all depends on Hughies development as he grows into an adult. But were getting the fights in and hey who knows? Great to speak to you Peter, thank you and I do hope you can make that fight happen against Haye. Yes me too, thank you very much it’s a pleasure.