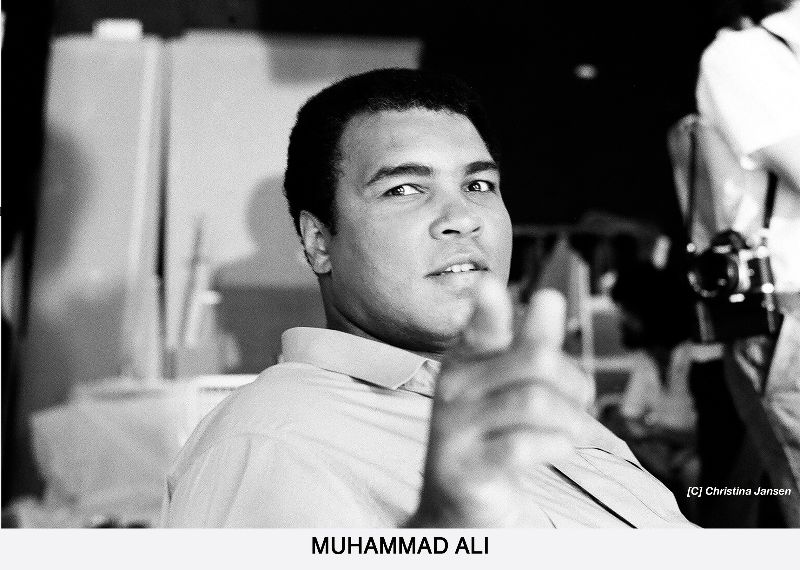 A major retrospective celebrating the past 71 years of Muhammad Ali’s life is making its northern debut in Bradford. It features a unique collection of iconic images from the world’s greatest photographers and artists.

A private view of ‘In the Rings with Ali’ on 20 June at The Midland Hotel launches the ten-day exhibition, open to the public until June 30. It offers a rare opportunity to buy some of the most famous photographs of Muhammad Ali by some of the world’s most acclaimed artists. Profits will go to Bradford based charity, QED-UK.

Bradford charity QED-UK and Yorkshire’s Cause UK, a specialist agency for charities, arts and the Third Sector, are behind bringing the London exhibition to the north.

Clair Challenor-Chadwick, MD of Cause UK, said: “Cause UK helped stage the London event during the Olympic Games and it was such a huge success that we just knew we had to bring it to the north. Bradford was the perfect choice. It’s a fantastically rich and cultured city as a UNESCO city of film, but it also seemed the right place for a celebration of the world’s most famous boxer, and Muslim, who has done so much good addressing prejudice of all kinds.

Bradford has shaken off its negative press of the past, and this is a fantastic way to build on the buzz around the city. The Midland Hotel has been very generous and supportive to host the exhibition, and I think everyone we’ve spoken to just feels a huge amount of positivity around this. It’s a fantastic to be part of something that clearly inspires people in Bradford. We hope people will come far and wide to visit.”

Adeeba Malik, Deputy CEO of QED-UK, said: “It’s fitting that this inspiring exhibition makes its grand northern premiere in Bradford, the ‘City of Dreams.’ At QED, we wanted to be part of it because it’s such a distinguished artistic celebration but also to promote the wonderful values of Muhammad Ali. He’s a global icon, and shows what greatness can be achieved with belief, passion, and poetry. His philosophy transcends ethnicity, class and creed, and his message around social justice resonates with our work to improve the social and economic position of disadvantaged ethnic minorities.”

At the launch, boxers and coaches from the Bradford Police and College Boxing Academy will attend with their very own boxing ring, as well as Muhammad Ali’s old adversary, Richard Dunn, who fought Muhammad Ali for the world heavyweight title in 1976. (pic pre fight, right)

Dunn is also notable as the only Yorkshireman ever to fight Ali. He lost in the fifth round and was knocked down five times in five rounds, but British fans have said that Dunn made one of the most courageous showings of any British boxer when he faced Ali. A sports centre, the Richard Dunn Sports Centre in Bradford, was named in his honour.

Mr Dunn said: “I was just honoured to be invited by Cause UK to attend the northern premier of this remarkable exhibition. Muhammad Ali is one of the last living icons of our time. I’m proud to support this event that extols all the wonderful values and philosophies of the great man.

“I really hope young people come and see the exhibition and get the passion and direction that he so naturally inspires. It isn’t just about boxing and sport, but about being the best you can be in life, finding your passion and making it happen.”

Three times world heavyweight champion, self-proclaimed “The Greatest”, Muhammad Ali was never less than entertaining as a boxer. There were his pre-fight insults to opponents delivered in rhyming couplets, his unorthodox fighting style – which he described as “float like a butterfly, sting like a bee” – and his homespun, inspirational views on life.

For the last 25 years, despite suffering increasing physical disability associated with Parkinson’s Syndrome, Ali has worked tirelessly for the humanitarian causes he believes in, including relief of poverty, education, adoption, race relations, and encouraging people of all races to understand and respect each other.

Adeeba added: “Bradford has been a City of riches and a City of destitution. In a City of Dreams, Ali’s are worth fighting for.”