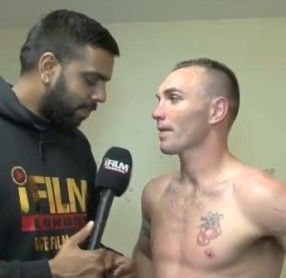 Video: Colin Lynes talks to iFilmLondon after his latest win

After a year out of the ring Colin Lynes returned to action, topping the Johnny Eames York Hall boxing show on Saturday night. Lynes took on Georgian Beka Sutidze, who turned out to be a rough house fighter and way out of his depth against the experienced former British, European and IBO world title holder.

At the end of the 6th Referee Ritchie Davies after several warnings eventually disqualified sutidze for consistant holding and rough house tactics, after he barged Lynes into the corner. Full fight report here.

Afterwards Lynes, who was having his first fight since losing his British title to Junior Witter spoke to iFilmLondon about his comeback and the fight.