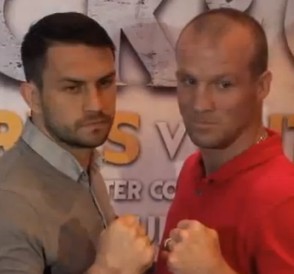 Paul Smith and Tony Dodson will lock horns again for the British title when the two Liverpool battlers contest the vacant strap three years after their first meeting. It was Smith who won that night in March 2010 to make the first defence of his Lonsdale belt at the Echo Arena in Liverpool. The return  takes place at the Bolton Arena on June 29th and is promoted by Matchroom.

Both boxers attended the press conference today at the Midland Hotel in Manchester.

Smith v Dodson talk to Kugan Cassius for iFilm London about their big return for the vacant British title, which is part of a huge bill in Bolton, topped by the lightweight clash between Welshman Gavin Rees and Manchester’s Anthony Crolla.

Watch Rees and Crolla talk about their fight here.

Rees’ fellow countryman Lee Selby who is on the verge of a big title fights, will also be in action at featherweight. Plus; former British light-middleweight champion Brian Rose will box for the first time since beating Joachim Alcine for the vacant WBO Inter-Continental light middleweight title in April and some of Matchroom Boxing’s up-coming talent will also be in action, including Team GB’s Olympic boxing captain Thomas Stalker.