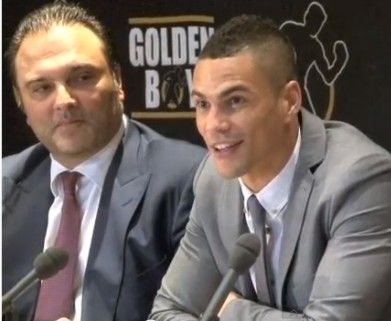 British Olympic bronze medalist Anthony Ogogo has set his sights on becoming a “global superstar” even earning a knighthood as he prepares to launch his professional career after signing with Golden Boy Promotions.

Agogo, 24, has his first professional fight set for April or May and has already mapped out his long-term goals once his career is under way, eyeing accolades in and out of the ring on his way to becoming a tour de force in the middleweight division.

“I want to become a global superstar,” he said.

“I’ve got massive aspirations and when I said this to the other promoters I got a look back from some of them but when I said it to Richard (Schaefer, chief executive of Golden Boy) he nodded along and said ‘let’s do it’ and it pretty much went from there really.”

Ogogo believes his successful battle to make the London Olympics proves he has the determination required to succeed at professional level.

He fought against medical advice to recover from a serious shoulder injury to make it to the Games and reckons that he is now ready to make the step up after signing a deal with Golden Boy.

“I think I have got that winning determination and that uniqueness that I think all successful people in life have,” Ogogo added.

“The reason why I know I’m going to be successful in this game is because, going back 18 months, I was told that the Olympics were not going to happen for me because my shoulder was basically hanging off.

“So I rehabbed very quickly, I was getting up in the middle of the night to rehab my shoulder and work really hard until I was in tears and had sick in the back of my throat – that shows that grit and determination I have and that is innate in me.”

Schaefer reckons signing Ogogo to the Golden Boy brand represents a first for Oscar De La Hoya’s promotion and he is looking to develop the raw talent he sees within the Norfolk-born boxer.

“The UK market has a very special place for us and we have built up a good name recognition here in the UK and have been involved with some of the biggest names in the last 10 years or so,” he said.

“It is a very, very special day – what we are doing today is really groundbreaking. We want to take a young fighter from his very first professional fight and make him a crossover superstar. A star who is recognised here in the UK and with his home fan-base but also in the US as well.

“I don’t think that has ever been done and it is a challenge for us and an opportunity for Anthony but I’m convinced, with the Golden Boy machinery behind it, that he will achieve it.

“We want to show the world that if you have the right talent with the right charisma that the sky is the limit and with Anthony I think we have that opportunity.”

Ogogo will certainly be a busy boxer if Schaefer’s plans for his early career are anything to go by and he could be joined by more precocious Brits in the future.

“Golden Boy is planning to do four live events a year in the UK under the Golden Boy banner and Anthony will be fighting on all four of those events while at the same time we also want him to fight at least four times in the US as well, so the plan is to give him eight fights,” said Schaefer.

“We are looking at signing potentially one or two other young fighters here in the UK to really put together a Golden Boy UK dream-team. We don’t want quantity we want quality.”