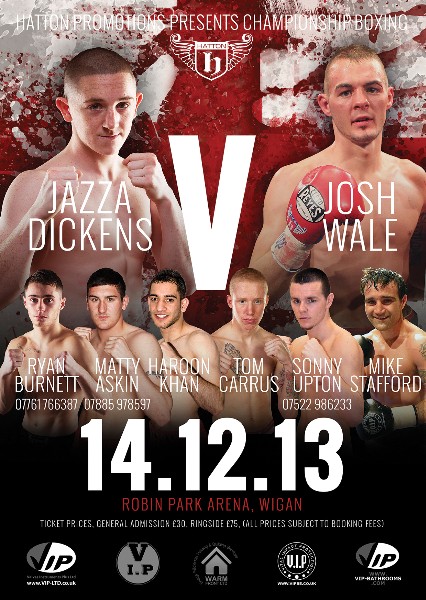 Barnsley’s Josh Wale believes he can exploit a chink in the armour of James ‘Jazza’ Dickens exposed by in September by common opponent Kid Galahad.

Wale challenges the Scouse southpaw for the English super-bantamweight crown on December 14 and feels he has the tools to hand him his second successive defeat.

Dickens was halted in the tenth round of his British title tilt against Kid Galahad in December despite being ahead on the scorecards.

Similarly, Wale lost to the Ingle-trained stylist in 2012, but managed to stay on his feet and was only ruled out because of bad cuts over both of his eyes.

“Jazza’s a good kid and I respect him, but that fight against Kid Galahad showed a bit of weakness. He got chinned and I’ll be trying to exploit that,” Wale, 15-6-1 (8 KOs), said.

“A lot of people had Jazza winning, but I didn’t think Kid Galahad had that knockout power. He must have hit me about 1,200 times and didn’t bother me so he might have found a flaw in Jazza.

“I think it could be the right time to get him because he’s gone to the mountain and he’s failed and you don’t know how he’s going to react to that.”

Like Dickens, Wale goes into the fight on the back of a loss. However, he isn’t letting his 12 round points reverse to Gavin McDonnell get to him and is keen to prove wrong anyone who doubts his potential for the top.

“I’ll keep going because I know I’ll get my day in the sun,” he stated. “It’s a long time coming, but people forget I’m only 25. I turned pro at 18 and I’m still fresh. I’m in the gym every day and I live and breathe boxing.

“People think a loss is the end of the world, but’s not. It’s all about how you perform and like your John Simpsons, your Derry Matthews and Johnny Nelsons, I’ll come good.”