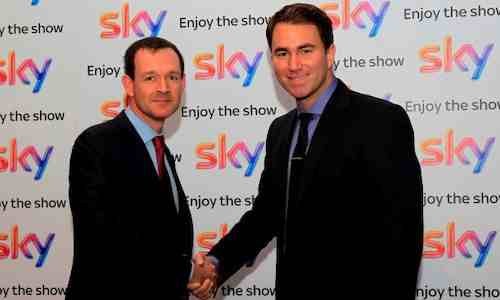 Matchroom Sport and Sky Sports today announced they have extended their partnership with 20 shows a season for two further years, commencing in June 2014.

Among some of the high profile fights ahead as part of the deal there is world title fights pencilled in for Carl Froch, Ricky Burns, Darren Barker, Scot Quigg, Tony Bellew and Kell Brook, with fellow British stars Kell Brook, Kevin Mitchell, Lee Selby and Anthony Crolla.

Matchroom Sport Managing Director Eddie Hearn said: “I’m delighted to announce a new two-year extension to our existing contract with Sky Sports which will see us as the principle promoter on the channel to summer 2016. We have developed one of the strongest stables ever seen in world boxing and the extension gives us the perfect platform to grow our team and provide them all with the ultimate opportunity to achieve within the sport.

“Sky shares our passion and vision for the sport and is a perfect partner as we look to grow boxing significantly over the next few years. It’s exciting times for an exciting sport and we have some mouth-watering plans to share with Sky Sports viewers.”

Executive Producer of boxing at Sky Sports Adam Smith said: “From the high drama of live Fight Nights to our extensive support programming like Ringside, Behind The Ropes and The Gloves Are Off, plus our huge commitment to online content, we are confident fight fans will continue to enjoy the very best quality, innovation and excitement on Sky Sports.”

Video of the announcement between Matchroom and Sky

• Tony Bellew heads to Canada to challenge the exciting Adonis Stevenson for the WBC Light-Heavyweight crown.

• Darren Barker wraps up a stellar year of boxing on Sky Sports when he defends his IBF Middleweight belt against Felix Sturm on 7 December.