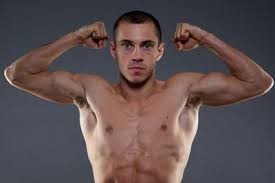 Scott Quigg and Yoandris Salinas both weighed today at 121.5 lbs. ahead off their WBA super-bantamweight world championship fight on Saturday night at the O2 Arena in London.

The fight was originally scheduled as the co-feature to last weekend’s postponed Haye-Fury card, but Matchroom Boxing moved this big fight to London for the following week.

Quigg, 24, is the champion in name but feels he needs to beat Salinas to be crowned the true holder of the belt. He was handed the vacant WBA world super-bantamweight title last month, after beating William Prado in June.

“On paper I’m a world champion. But I don’t want to be given the title. I’ve worked so hard from a young age and I want to do it the right way and that is by winning it in the ring against a world-class opponent.

“I’ve never boxed in London as a pro and it’s an honour to top the action with Joshua, Luke Campbell, Kevin Mitchell and Lee Selby.”

The Miami-based Cuban is not fazed by the prospect of a big partisan crowd at London’s 02 Arena and plans to spoil Quigg’s coronation party.

“This is the first time I have fought in the UK, but my last nine fights have been outside my home in the United States,” said Salinas.
“It’s never affected me. Not the timing, not the fans, not anything regarding being outside of my home.”

Other weigh-in videos from the 02 Arena show.

Anthony Joshua won the super-heavyweight gold medal at the London Olympics last year and this weekend he has his first professional fight against Italy’s unbeaten Emanuele Leo at the O2 Arena on Saturday night.

Joshua, 23, has already set his sights on winning a world title in the future and is looking forward to the journey getting there, starting against Leo.

“It’s the start of a journey, hopefully it’s a great one and we will get that world title, God willing. I’m with a good promotional team and I’m sure they can pull the strings to make it happen.” said Joshua.

“I know what I’m getting into, I know how to prepare for it mentally,”

“That’s why I am very relaxed going into October 5. Experiences which I didn’t have as an amateur, I have as a professional.

Mitchell, 28, returned after having a break from the ring after his world title defeat against Ricky Burns last year, to record a points win over Sebastian Benito at York Hall in July.

A win on Saturday could catapult him into the reckoning for a second crack at a world title next year.

“It’s a great chance for me to get right on track for another world title shot,” he said. “Things are going great with Tony Sims and I’m ready for a test like this at The O2.

“I am determined to get back into the reckoning for the big prize next year and I’m sure Marco wants to do the same so it’s going to be a massive night.”

Promoter Eddie Hearn added: “Kevin is part of a fantastic domestic division but the ultimate goal has to be another crack at the world title.

“Victory against Lopez will set up a big fight later in the year and hopefully a shot at the IBF king Miguel Vazquez in 2014.”

Other fights on the bill